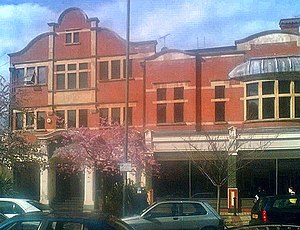 An exterior view of the Olympic Studios in Barnes, London, taken in 2008.

Olympic Sound Studios was an independent commercial recording studio in London, best known for the many rock, pop and sound stage recordings made during late 1960s onwards. Highly regarded, it was used by acts such as The Rolling Stones, Jimi Hendrix, Led Zeppelin, Dave Mason and The Beatles,[1] and is often viewed as being as important as Abbey Road Studios.[2][3] The studio's sound mixing desks became famous when the technology and design they pioneered was later manufactured commercially.

The first home of Olympic Sound Studios was in Central London in the late 1950s. It was owned by Angus McKenzie who had purchased Larry Lyons's Olympia Studio in Fulham. McKenzie then took on a lease for a derelict synagogue situated at Carlton Street in London's West End.[4]

In conjunction with Richard "Dick" Swettenham, McKenzie opened Olympic's Studio One with a valve-based recording console from the Olympia Studio.[1] Swettenham designed the first professional transistorised desk in the world, which was installed into studio One during 1960, along with the first Four track tape recorder in England.[1] The studio first came to prominence in 1958 when its senior sound engineer John Timperley recorded music which was listed in the music magazine Melody Maker's top ten ratings. John Timperley's assistant was Roger Savage who quickly gained a reputation as a good sound balancer. In 1962, Terry Allen joined the company as an electronic engineer assisting Dick Swettenham with his new transistorised sound desk. Allen soon became studio manager and Timperley left the studios in late 1962 when Keith Grant was given the position of senior sound engineer. Another employee was Michael Ross-Trevor who eventually joined CBS Records at the start of a long career in classical music recording.

Studio One was used by many influential groups including The Yardbirds, The Jimi Hendrix Experience, Dave Mason, Alexis Korner, The Seekers and Graham Bond.[5] The Rolling Stones[6] recorded their first single "Come On" at the studio, Dusty Springfield hits and The Troggs' single "Wild Thing" were also recorded at Olympic during the 1960s. Olympic was a preferred recording studio with A&R staff who worked for record companies including Decca, EMI, Pye and Philips. The studios also hosted London Weekend Television music recordings.[7]

In 1966, after the lease on the Carlton Street premises was not renewed McKenzie sold his share of the business to Cliff Adams and John Shakespeare who moved the studios to Barnes under the guidance of Keith Grant. Grant oversaw the development of the new studios bringing in his father Robertson Grant as an architect.[1]

Situated at 117 Church Road, the Barnes building was constructed in 1906 and known as Byfeld Hall, a theatre for the Barnes Repertory Company. In its first decade, it was a venue associated with the bioscope, an early form of cinema combined with music hall and instrumentation.[8] Between the 1930s and the post-Second World War era, it was a cinema. In the 1950s, the building became television production studios. Actors who played there included John Gielgud and Claude Rains.[9]

Apart from Roger Savage, several other young staff began their careers at Olympic Studios. Among them was Gus Dudgeon who began as a tape operator and was later associated with Elton John and used Olympic Studios for sessions with John, as his producer. Engineer Eddie Kramer recalled that in 1967 "Olympic Studios was at the cutting edge of technology. We were very innovative and of course we had [I think] the best console in England and possibly the world at the time".[10] "We were ahead in terms of design."[11] The Rolling Stones were among the first clients of the new Olympic Studios in Barnes, consecutively recording six of their albums there between 1966 and 1972.[12] The Beatles worked at the studio to record the song "All You Need Is Love" (1967),[10] having been happy with their recording of the song "Baby, You're a Rich Man" (1967) on their first visit to Olympic. Jimi Hendrix recorded tracks for his album Are You Experienced (1967), the tracks for Axis: Bold as Love (1967) and a large part of Electric Ladyland (1968). The Who recorded their albums Who's Next (1971) and Who Are You (1978) there and it was used extensively by Led Zeppelin, who recorded tracks there for all of their studio albums up to and including Physical Graffiti (1975). In the same year, Queen used the studio for their album A Night at the Opera (1975) and David Bowie used the studio at the same time. The studio also saw the production of other landmark albums and singles including tracks by Small Faces, Traffic, Blind Faith, Hawkwind, The Seekers, The Moody Blues and Deep Purple. Procol Harum recorded all tracks for their eponymous first album "Procol Harum" (1967) at Olympic.[7]

In 1969, Grant commissioned his father to re-design studio Two as the now unexpectedly popular studio was causing problems with sound transmission to Studio One. Studio One, for example might be recording classical music by Elgar while Studio Two would be hosting sessions with The Rolling Stones. Robertson Grant successfully innovated a completely floating space weighing seventeen tons which was supported by rubber pads. The décor and furnishing of the new studio Two was designed by Mick Jagger.[1] Later on, Grant added probably the first instant acoustic change, using rough sawn wooden slats which could cover or reveal sound-absorbing panels behind them and change the acoustic sound. This made the room suitable for the recording of both rock and orchestral music at the pull of a cord.[1]

By the turn of the 1970s, many orchestral works and film scores such as the original album version of the rock musical Jesus Christ Superstar were being recorded at Olympic. The studio produced film music for The Prime of Miss Jean Brodie (1968), The Italian Job (1969), the movie version of Jesus Christ Superstar (1973), The Rocky Horror Picture Show (recorded in studio Two in 1975) and Life of Brian (1979), amongst others.

Olympic Studios' sound mixing desks were a creation of the maintenance staff and built specially for the studios. They became known as Olympic desks[7] and were developed by Dick Swettenham, Keith Grant and later Jim McBride in conjunction with Jim Dowler. Swettenham later started to manufacture the consoles commercially as Helios desks. The first desk of this type was commissioned by Grant as Helios One for studio Two. Olympic desks and their Helios spin-off are still highly regarded for their sonic qualities today.[13]

For many years, copyright problems with the use of the word "Olympic" prevented the history of the studio from being more widely promoted, which became an important factor in its arch-rival Abbey Road Studios attracting greater recognition due to promotion by EMI.[14]

In 1987, Virgin Music bought the studios and the property was refitted to a different practical and acoustic specification, further to consulting with Sam Toyoshima, a Japanese studio builder who surprisingly declared the studio "unfit to record music in".[6] Barbara Jefferies, then Studio manager for Virgin Music at Olympic Studios,[15] instructed that the master tapes of the studio's vast library of recording sessions be discarded.[16] The disposal of these tapes was unsecured. They were put into skips outside the building, remaining there for days. Some were recovered by people unnassociated with the studio, and ended up as highly sought-after bootlegs.[17] The re-vamped studio continued to attract many leading artists during the period of the 1990s and 2000s including Madonna and Björk.

In December 2008, the Virgin EMI group announced that the long standing studio facilities would be closed[18][19] and in February 2009 the studios closed.[13] 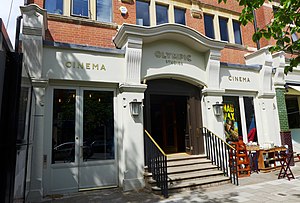 The Olympic Studios cinema in 2015

The London Evening Standard newspaper reported that a buyer for the building as a studio could not be found and it seemed likely that Olympic Studios would lose its musical and cinematic history due to a development of flats and shops.[20] After four years of closure, Olympic Studios re-opened on 14 October 2013 as a cinema with two screens, a café with dining room and a recording studio.[21] The conversion of part of the original building to a small recording studio was undertaken by architect Robertson Grant and the acoustics completed by original studio sound staff member Keith Grant and Russel Pettinger.[12] The new studio facility operates alongside the building's historical role as a cinema using Flare Audio cinema sound.[22] The cinema also uses a Flare sound system.[23]

Olympic Studios is known for the quality of the recordings produced in its studios, and as a training ground for many successful producers, technicians and engineers, such as:

Share
Retrieved from "https://en.everybodywiki.com/index.php?title=Olympic_Studios&oldid=2046062"
Categories:
Hidden categories:
This page was last edited on 8 September 2021, at 01:40.
Content is available under License CC BY-SA 3.0 unless otherwise noted.
This page has been accessed 258 times.
Privacy policy
About EverybodyWiki Bios & Wiki
Disclaimers