Oyster Protocol is a web-publishing monetization and distributed storage solution built on the IOTA and Ethereum blockchains. Oyster unlocks the dormant revenue potential of millions of websites. PRL is the economic bridge between content publishers, content consumers, storage providers, and storage consumers. SHL tokens are used to pay for connectivity and decentralized application operation across the Oyster meshnet, and will eventually be used to access the decentralized web by bypassing ISPs.[1]

Oyster provides website publishers an alternative revenue source to traditional web advertising. Oyster also offers a decentralized storage system to combat the many popular centralized storage systems available on the market. Instead of crowding a web page with banner advertisements, website owners can use the Oyster protocol to earn Oyster Pearls (PRL) via their audience, ultimately providing a vastly improved user experience to the individuals visiting the website. These PRLs will be pegged to 64 GB of storage per year on the Oyster network, pegging the value to a stable source and guaranteeing their worth as a commodity that can be traded for the currency of the website owner’s choosing. Additionally, as the Oyster protocol continues to be adopted, the Oyster network grows exponentially, creating a decentralized network strongly suited for the production of decentralized applications, as well as a mesh network that can provide internet access to any individual across the globe without the need of an Internet Service Provider (ISP).[2]

Both PRL and SHL are utility tokens. PRL is both an asset that can be earned by website owners using the Oyster protocol, as well as a storage-pegged token that can be used to host data on Oyster’s decentralized network anonymously.

Currently, news sites rely on advertising, subscriptions, and/or donations. The Oyster Protocol eliminates the need for reliance on any of these revenue streams by essentially turning every website visitor into a Web Node. Publishers put the Oyster code into their websites, making every visitor a Web Node. Web Nodes are everyday computers and smartphones that transfer some of their computational resources (CPU and GPU). The power of their computer is used to enable user’s files to be stored on an anonymous, decentralized ledger. The website owners, nonprofits in this case, are paid indirectly by the storage users.[4]

By utilizing decentralized storage, Oyster works as a puzzle. Files can be broken into many pieces. Each piece is then individually encrypted. On its own, each piece is useless to hackers or other third-party observers. Anyone who uses Oyster Pearl essentially purchases a utility token pegged to the size of data storage that they can use to upload. All of this data is anonymized and encrypted with just one private key referred to as the Oyster Handle. Without the Oyster Handle, the uploaded file is inaccessible. Users can trust that any file uploaded by the Oyster Protocol will be accessible only by the user, and that their data will remain secure across the Oyster network for the time period purchased.[5] 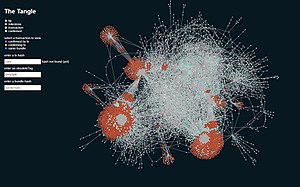 Decentralized data storage also has practical applications for revolutionizing a variety of industries where privacy of information is sacrosanct.

Whistleblowers require secure storage to keep the prying eyes of politically motivated organizations off their data. Oyster Protocol is more encrypted than using a traditional encryption via PGP or Tor, because there are no email logins, passwords or encryption keys required – every file uploaded has just one private key.

Healthcare organizations are another benefactor of the security provided by decentralized storage.[6]

The Oyster Testnet has undergone several developments since its release on January 31, 2018, including development of its back-end infrastructure and upload speed. With the release of Testnet B, the Oyster development team has increased the upload speed by 26,414 percent. The number of transactions on the IOTA Tangle associated with Oyster is 809,328, with each transaction roughly 0.6 kbs in size.

Retrieved from "https://en.everybodywiki.com/index.php?title=Oyster_Protocol&oldid=941489"
Categories:
Hidden category:
This page was last edited on 10 August 2020, at 15:05.
This page has been accessed 145 times.
Content is available under License CC BY-SA 3.0 unless otherwise noted.
Privacy policy
About EverybodyWiki Bios & Wiki
Disclaimers
Mobile view