Portraits of Presidents of the United States 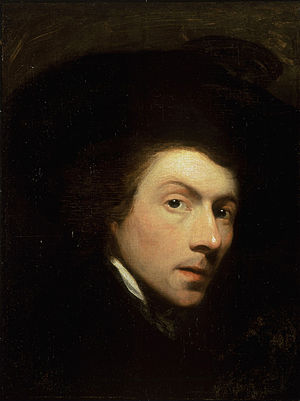 Gilbert Stuart was the first painter to paint a presidential portrait.

Beginning with Gilbert Stuart's portrait of George Washington, it has been traditional for the President of the United States to have an official portrait taken during his time in office, most commonly an oil painting. This tradition has continued to modern times, although since the adoption of photography as a widely used and reliable technology, the official portrait may also be a photograph (or at least a photograph may be substituted while a painting is being made). Currently, an official oil portrait is commissioned after the presidential term is finished, and takes one or two years to be finished.[1]

Presidents often display the official portraits of other presidents whom they admire in the Oval Office or elsewhere around the White House, loaned from the National Portrait Gallery.

The Presidential portrait of George Washington was famously rescued by the First Lady Dolley Madison when the British burned down the White House in the War of 1812.[2]

President Theodore Roosevelt's official portrait was originally commissioned to Théobald Chartran in 1902, but when Roosevelt saw the final product he hated it and hid it in the darkest corner of the White House. When family members called it the "Mewing Cat" for making him look so harmless, he had it destroyed and hired John Singer Sargent to paint a more masculine portrait.[3][4]

Sargent followed Roosevelt around the rooms of the White House, making sketches looking for the right lighting and pose, but was unhappy with them. When Roosevelt headed toward a staircase to try the rooms on the second level, both of their patience was running thin. Roosevelt suggested that Sargent didn't have a clue what he (Sargent) wanted. Sargent responded that Roosevelt didn't know what was needed to pose for a portrait. Roosevelt having reached the landing, planted his hand on the balustrade post, and turned to Sargent angrily demanding "Don't I?!" And the perfect pose had been found.[5]

Roosevelt, always active, only agreed to stay still for half an hour a day, after lunch. But the portrait was eventually finished, and adored by Roosevelt.[4]

During Ronald Reagan's presidency, he moved Coolidge's portrait from the Grand Hall into the Cabinet Room next to Thomas Jefferson's portrait. Reagan admired and quoted Coolidge, and thought Coolidge's impressive performance in the "roaring twenties" was outstanding. Reagan believed that Coolidge's portrait was much more suitable next to a founding father.[citation needed]

President Herbert Hoover's official portrait was completed 23 years after he left office. The first official portrait was painted by John Christen Johansen in 1941. However, Hoover later commissioned a second portrait which was completed in 1956 by Elmer Wesley Greene. At Hoover's request, this painting replaced the original, and currently stands as the official White House portrait.[6] The Johansen painting now resides at the Herbert Hoover Presidential Library and Museum in West Branch, Iowa.[7]

File:Catching Up with The Curator- The Presidential Portrait of John F. Kennedy.webm President John F. Kennedy's official portrait was painted posthumously by Aaron Shikler by request of Jacqueline Kennedy in 1970. It is generally analyzed as a character study. Unlike most presidential portraits, Kennedy's depicts the president as pensive, with eyes downcast and arms folded. According to Shikler, Jackie's only stipulation was for him to create an image different from "the way everybody else makes him look, with the bags under his eyes and that penetrating gaze. I'm tired of that image." Shikler drew a few sketches based on photographs, one of which was inspired by Ted Kennedy's somber pose at his brother's grave, his arms crossed and his head bowed. Jackie chose that sketch as the final pose.[8] Shikler also painted the official White House portraits of First Lady Jacqueline Kennedy and the Kennedy children.

The presidential portrait of Bill Clinton was the first of such portraits to be painted by an African American, Simmie Knox.[9][10]

The official White House portrait of George W. Bush was revealed on May 31, 2012.[11] It was painted by John Howard Sanden who also painted the official portrait for First Lady Laura Bush which was revealed at the same time as her husband's portrait. In addition, Bush's portrait for the National Portrait Gallery was uncharacteristically released several weeks before his administration had ended. Painted by Robert A. Anderson, it was unveiled at the National Portrait Gallery of the Smithsonian Institution in Washington, D.C. on December 19, 2008. President Bush jokingly opened the unveiling with "Welcome to my hanging", which resulted in laughter from the room.[12] This was an official portrait commissioned by the White House, but funded by private donorship.[13]

The caption at the National Portrait Gallery beside President Bush's portrait originally read that his administration was "marked by a series of catastrophic events..." [including] "...the attacks on September 11, 2001, that led to wars in Afghanistan and Iraq." Vermont Senator Bernie Sanders wrote a letter to the director of the National Portrait Gallery, noting the link between the terrorist attacks and Iraq had been "debunked". Director Martin E. Sullivan assured him the label would be changed to delete "led to".[14]

File:The President, in 3D.webm Barack Obama was the first President to have his portrait taken with a digital camera in January 2009 by Pete Souza, the then–official White House photographer.[15] The picture was taken with a Canon EOS 5D Mark II. The painted portrait of Barack Obama is expected to be finished at a later date.

Obama was the first President to have 3D portraits taken, which were displayed in the Smithsonian Castle in December 2014.[16]

The first official Presidential portrait of Donald Trump was released the day before his inauguration and was used for the official @POTUS Twitter account[17] until May 5, 2017.

This article "Portraits of Presidents of the United States" is from Wikipedia. The list of its authors can be seen in its historical. Articles copied from Draft Namespace on Wikipedia could be seen on the Draft Namespace of Wikipedia and not main one.