Prime Point Foundation, officially inaugurated in December, 1999,[1] is a not-for-profit organization founded by Krishnaswamy Srinivasan. Srinivasan, also known as Prime Point Srinivasan, is a communication expert, social worker, Digital journalist and former banker. Dr. M. S. Swaminathan, an agricultural scientist, inaugurated the trust. The present trustees include the founder and S. Narendra, a former spokesman of the Government of India and former information advisor to the Prime Minister of India. The trust aims to create awareness about communication, journalism and public relations among the students of Indian universities and colleges. The Foundation also promotes positive journalism through its ezine PreSense

Moreover, to encourage the communication and journalism awareness, the foundation has also presented a number of awards:

The foundation is also associated with a number of online activities. For instance, the Foundation maintains India Vision 2020, a website inspired by the book India 2020. 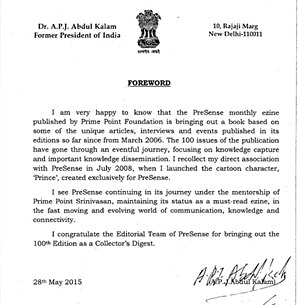 The Foundation has also published three printed editions of 'Collectors Digest' titled PreSense100, PreSense100+ and PreSense130 covering select articles published in the first 100, 110 and 130 [4] issues of PreSense respectively. Former President of India Dr. A P J Abdul Kalam has given the Foreword to the first edition of Collectors Digest.

Since 2010, the Foundation presents Sansad Ratna Award to top performing Lok Sabha Members based on their participation in debates, introduction of private members bills and raising questions. 9th edition of Sansad Ratna Award function was held on 9 June 2018 at Indian Institute of Technology Madras, who is associated with this initiative since 2012. [5]

Retrieved from "https://en.everybodywiki.com/index.php?title=Prime_Point_Foundation&oldid=1744442"
Categories:
Hidden categories:
This page was last edited on 27 May 2021, at 17:35.
This page has been accessed 53 times.
Content is available under License CC BY-SA 3.0 unless otherwise noted.
Privacy policy
About EverybodyWiki Bios & Wiki
Disclaimers
Dark mode