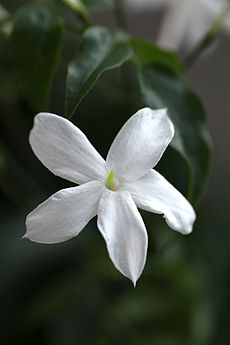 Provincial flowers are species of plants selected to represent each Provinces of Pakistan. The origin of province flowers comes from the Cultural diversity of the country and its local Traditions of which the idea to the state flowers of Sub nationalism respectively, some are regional and others are territorial. Mostly they do not encompass the official national flower and the "provincial flowers" are of its constituent provinces.

The National Flower of Pakistan is the Poet's Jasmine (Jasminum officinale).

Share
Retrieved from "https://en.everybodywiki.com/index.php?title=Province_flowers_of_Pakistan&oldid=999641"
Categories:
Hidden category:
This page was last edited on 7 September 2020, at 11:48.
Content is available under License CC BY-SA 3.0 unless otherwise noted.
This page has been accessed 733 times.
Privacy policy
About EverybodyWiki Bios & Wiki
Disclaimers