Quikjet Cargo Airlines Pvt. Ltd., branded as Quikjet Airlines, is an all cargo airline based in Bangalore, India. It was formed in 2007, promoted by AFL Pvt Ltd. Switzerland-based Farnair picked up a 36.2% stake in the airline in February 2012, making AFL the second-largest shareholder with 20.8% stake in the carrier.[3] QuikJet had operated one of Farnair’s twelve ATR 72-200(F)s until March 2013 before temporarily closing shop in anticipation of a B737-400F.[4] In May 2015, India’s Foreign Investment Promotion Board (FIPB) approved Farnair’s plan to step up its stake in Quikjet Cargo Airlines from 50.93% to 72.59% in multiple stages involving a minimum total foreign direct investment of Rs. 14.4 Crores. Quickjet plans to launch scheduled domestic cargo services using Boeing 737 aircraft.[5] 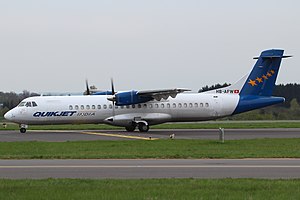 Quikjet operated a single ATR 72-200F from 2011 until 2013.[7] The aircraft is shown here at Luxembourg Findel Airport following its return to Farnair Switzerland

As of February 2016, Quikjet Cargo flies to the following destinations:

As of August 2017, Quikjet Cargo operates the following aircraft: [9]