Mushtar Jehan was an Indian and Pakistani film actress. She was born in Bombay, British India. 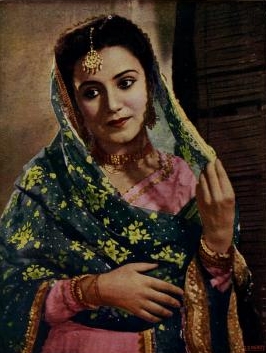 Portrait of Rehana from Sargam

After 1952, her career sharply went on the decline as films like Rangeeli (1952), Chham Chhama Chham, Hazar Raatein (1953) and Samrat (1954) all sank at the box office. With her career on the decline in India, Mushtar migrated to Pakistan with the hope of continuing her career there.[1] 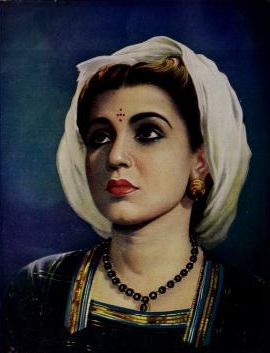 She is regarded as Hindi cinema's first "jhatka queen".[1][3] Whether it was her infamous "lesbian act" with Nigar Sultana in Sunehre Din (1949), or the famous bath scene in Dilruba (1950), Mushtar stayed in the news. Shin Sinaki Boobla Boo (1952) became the first film to be banned by the Ministry of Information and Broadcasting because of its low moral tone, even when it was certified for unrestricted public viewing by the censor board of India. Immense public support for the actress made the information and broadcasting ministry of the central government bow down and allow the unrestricted release of the film, but the huge delay reduced its success at the box office.[2]

In 2010, Mushtar's family filed a case against film producer Ekta Kapoor and director Milan Luthria, at the Allahabad High Court and the legal notice says that the filmmaker has used the name Mushtar without her consent in the film Once Upon A Time in Mumbaai and it has maligned her image.[3]

Retrieved from "https://en.everybodywiki.com/index.php?title=Rehana_(actress)&oldid=819991"
Categories:
Hidden categories:
This page was last edited on 19 June 2020, at 16:13.
This page has been accessed 117 times.
Content is available under License CC BY-SA 3.0 unless otherwise noted.
Privacy policy
About EverybodyWiki Bios & Wiki
Disclaimers
Mobile view