For other uses, see Republic of Florida.

The Republic of Florida was a territorial entity that lasted between June 29 and December 23 of 1817. It was bounded by US to the north, and to the south by the Captaincy General of Cuba across the sea, and to the east the British colony of the Bahamas.

Creation of the Republic: context[edit]

While the Spanish Empire in America began its decline due to the Napoleonic wars, the United States began their territorial expansion to the south and west of its border limits at the time, consolidating its acquisition of Louisiana to France. The situation then began to change in the Spanish colony of Florida, a territory several times had previously been disputed by England (previously occupied between 1763–1783), so Madrid began to negotiate its surrender to the Americans so as not to fall back into British hands, given the tumultuous time when the Spanish American colonies sought independence.

In the Guayana Province, General Simon Bolivar in the midst of the struggle to regain the freedom of Venezuela, considered the only way to stop the Spaniards to occupy the islands of Cuba and Puerto Rico in order to hasten the end of their presence on the continent. Tn this order, Bolívar commissioned in Angostura (Venezuela) one of his officers, Scottish Gregor MacGregor, to organize an expedition in US territory in order to occupy the Florida peninsula, cut the trade between the US and Spain, and facilitate the invasion of Cuban territory to defeat the Reconquest of Venezuela.

MacGregor manages to recruit Charleston and Savannah 150 militants, mostly veterans of war of 1812. Among the expedition they were: Pedro Gual, Juan Germán Roscio, Constante Ferrari, Agustín Codazzi and Lino de Clemente the latter was appointed by Bolívar to represent the interests of the nascent republic before the government of Washington.

The US meanwhile coveted annexing the whole territory of the Florida Spanish colony that was part of the Captaincy General of Cuba. Given this scenario Bolívar planned the creation of the republic as a strategy to cut the passage of ships from the ports of Boston and Havana carrying arms and ammunition to the royalists in the south of the continent, and release in the near future Cuba, which was also held by Spain. So Florida is considered a target by US expansionism, promoted by President James Monroe and a strategic place for the war of independence Latino for Simon Bolívar. Bolívar wrote:

The American general Jackson has taken by assault the fort of Pensacola, forcing the inhabitants to retreat to Barrancas, where lately had taken refuge; thus all Spanish Floridas are held by North Americans .

Gregor McGregor, fulfilling the designs of Bolivar, took by surprise Amelia Island on June 25 of 1817 and hoisted the Venezuelan flag and the Green Cross Florida in theFort San Carlos of Fernandina once the Spanish garrison under the command of Brigadier Francisco Morales, to make the seat of government of the new Republic of Florida. 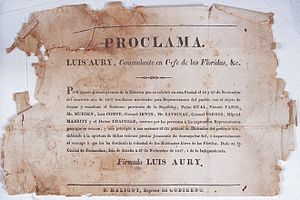 Document of the Proclamation of the Republic of Florida.

Once the republic was created, institutions were organized, authorities were appointed, and deadlines were set for those who did not like independence to sell their goods and leave the territory. On July 1 the republic was officially proclaimed on ( Jacksonville). Meanwhile Pedro Gual, would draft a constitution. Upon being notified of the facts, Bolivar was pleased feat preying on the Orinoco the schooner s American Tiger and Liberty , which served as support for transport of materiel and the Spanish violating the naval blockade imposed by himself and seizing the goods carried on board and prompting the US intervention.

MacGregor took Amelia Island until he got more support from his patrons in September 1817. MacGregor their ships headed for the Bahamas and left the island in the hands of the French privateer with Mexican patent Louis-Michel Aury, which declared part of the Republic of Mexico. Taking advantage of his military experience, he organized Aury marine territorial defense to cut arms supplies stores from Havana.

The Spanish-American expedition: the end[edit] 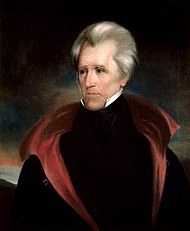 The government of President James Monroe, alerted to the facts in Amelia Island, he described them as an affront to their aspirations of annexing Florida, denouncing the nascent republic under the pretext of crushing the international naval piracy and subdue Indians semicolon s that harassed the settlers from the neighboring Georgia. To expedite the approval of Congress President Monroe made use of incidents that led to end their existence, such as the fire at the Venezuelan ship Tentative for having invaded US waters.

The next day, Andrew Jackson commanding troops from Galveston (Texas), he took all the island expelling the expeditionary force of Fort San Carlos de Fernandina.

To reinforce the US victory and avoid retaliations serve as a pretext for any accusation of illegitimacy, he was appointed himself Jackson as governor of Florida while buying the land, which legally belonged to was ahead Spanish Crown .

Currency issued in 1817 in the "Republic of Florida"

The United States, once it had taken Florida, made a deal with Spain for the transfer of territory through the Adams–Onís Treaty signed on February 22, 1819. Florida subsequently became the 27th state of the United States on March 3 of 1845. 3 of March of 1845.

Following the taking of Florida, United States unsuccessfully tried to pay compensation for the collapse in the Orinoco schooners Tiger and Liberty ordered by Bolivar. President Monroe sent his delegate John Baptiste Irvine the (July 12 of 1818) to discuss in Angostura on the matter, but was treated by Bolivar with disdain (and in revenge for the rejection that made the US government to Lino de Clemente) arguing that the United States violated its neutrality by supporting the Spaniards, reproaching his abandonment of the ideals of freedom for which they had fought, attributing one of his quotes:

After participating as a guest in the Congress of Angostura (February 15, 1819), Irvine returned to the United States; where he described Bolivar as "General charlatan and political buffoon". Then the US government sent the then lieutenant (and future Comodoro) of the US Navy Matthew Calbraith Perry (1794–1858), to demand the government of the Republic of Venezuela payment of compensation for the sinking of the ships Tiger and Liberty . Their demands were finally met by the then vice president of Venezuela, Francisco Antonio Zea; capitulation was described by Simon Bolivar in Santa Fe de Bogota where he had triumphantly entered after the Battle of Boyacá as an act of humiliating weakness.

Retrieved from "https://en.everybodywiki.com/index.php?title=Republic_of_Florida_(1817)&oldid=950871"
Categories:
Hidden category:
This page was last edited on 13 August 2020, at 21:23.
This page has been accessed 1,804 times.
Content is available under License CC BY-SA 3.0 unless otherwise noted.
Privacy policy
About EverybodyWiki Bios & Wiki
Disclaimers