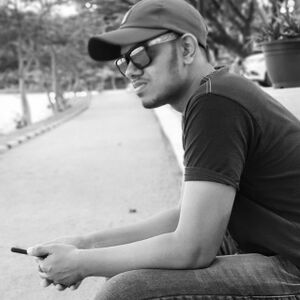 Rimash shan (Mohammed Rimash) is a Sri Lankan Musician, Charted accountant, Born and raised in Kurunegala, Sri Lanka, Rimash started his music career in 2021. At age 19 he learned music production by himself. In September of 2021, he released his first music.

He studied ordinary level exams in the Kurunegala district. After he got good results he was selected for the Gampola Zahira national college. He studied in the commerce stream for advanced-level exams. He has a good knowledge of accounting and he decided to study in the accounting field. Now he is an undergraduate at the Institute of charted accounting in Sri Lanka. while he playing football for his school he learned music by himself. He is a very talented football player. He gave so many achievements for his school. he learned to swim with a special trainer. He got police swimming training in Sri Lanka police and he participated in so many swimming competitions.

While he studying he learned web designing as a freelancer. He gave his freelancing services as a web designer, Blog writer, and graphic designer. Now he stopped his freelancing works because of his studies. But if someone asked his help he will. He has to face so many hard exams in the future.

He is a Verified music artist on Spotify and his music is streaming on Apple music, Deezer, and all the other music platforms. He has an official verified YouTube Artist channel. He is doing music production as a hobby. But his parents want to see him like a charted accountant.

His mother language is Tamil and he can speak Sinhala and English very well. He has friends in all the religions of Sri Lanka. He is a Muslim guy and he respects all the other religions. He lived in a small village called Rideegama. His village is very famous for coconuts. He lived his childhood in his village with lots of good memories. His father is a businessman he lived 6 years in Saudi Arabia. his father can speak six languages. His mother is a housewife and he has three sisters.

He aims to be a charted accountant in soon as possible. After his graduation, he will continue his career in the music field because he like music more than accounting.

He started to write a book in his school time and he is going to share his life story in that book. He is going to publish his book very soon.

Retrieved from "https://en.everybodywiki.com/index.php?title=Rimash_Shan&oldid=2115593"
Category:
Hidden categories:
This page was last edited on 23 October 2021, at 08:35.
This page has been accessed 209 times.
Content is available under License CC BY-SA 3.0 unless otherwise noted.
Privacy policy
About EverybodyWiki Bios & Wiki
Disclaimers
Dark mode