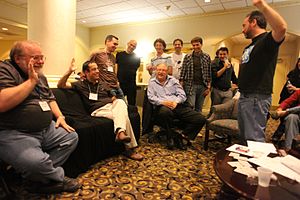 Gutman was a founder of the Interactive Health company HealthTap. He was removed as CEO on May 1, 2018, amid allegations he intimidated employees.

Gutman studied at Stanford University as a graduate student.[2]

In 2006, Gutman founded Wellsphere, an online consumer health company, where he served as CEO. Wellsphere, an active community of health writers, served more than 100 million people. The site was acquired in early 2009.

Gutman founded HealthTap,[7] a health technology startup, in 2010 and served as CEO until 2018.

In May 2018, Gutman was fired from HealthTap by the board of directors. The reason, the board said in a letter to employees, was that it had finally heard too many complaints about Gutman's inappropriate behavior inside the company.[8] The letter stated that Gutman engaged in repeated "acts of intimidation, abuse, and mistrust, and that [he] repeatedly mistreated, threatened, harassed and verbally abused employees."[9] Gutman was replaced by Bill Gossman.

Gutman frequently speaks at technology and health conferences (such as TED,[5] SXSW and Health 2.0). His writing on health, technology and smiling has been published in national publications including Forbes,[10] Harvard Business Review[11] and the Huffington Post[12]

Gutman is an active leader in the TED community. In 2011, he gave a popular TED Talk on smiling, which has been translated into 46 languages.[13] The ideas presented in the talk have been dismissed by psychologists as an amateurish confusion of correlation with causation.[14] In 2012, he published a TED Book, Smile: The Astonishing Power of a Simple Act.[15] He also serves as the Curator of TEDx Silicon Valley.

Retrieved from "https://en.everybodywiki.com/index.php?title=Ron_Gutman&oldid=1248720"
Categories:
Hidden categories:
This page was last edited on 16 January 2021, at 03:35.
This page has been accessed 75 times.
Content is available under License CC BY-SA 3.0 unless otherwise noted.
Privacy policy
About EverybodyWiki Bios & Wiki
Disclaimers