Sky Raiders (Hebrew: הרפתקה בשחקים‎ Harpatka Bash'hakim) is a 2019 Israeli family film. The film was directed by Lior Chefetz and the story was co-written by Chefetz, Ian Dickinson and Joe Swanson inspired by Oded Marom's 1980 children's book Adventure in the Squadron. The film is about a misfit boy and girl who struggle to repair an antique plane just in time for the annual airshow.

13-year-old Yotam is passionate about aviation, but his overprotective mother won’t let him anywhere near planes, especially after he lost his father in a crash a few years ago. When Yotam and his classmate Noa find a rare Avia S-199 antique plane in a local junkyard, they decide to restore it with the help of Morris, a lonely old neighbor who used to be a pilot. In their journey to the sky, they must face Noa’s strict father, her envious brother, and their deepest fears – in order to bring the plane back to life just in time for the annual airshow.

The film was shot in November 2017 on location at the Israeli Air Force Museum, Rishon Le'tzion municipal airstrip and in the village of Beit Hanan.

The aircraft used in Sky Raiders are: 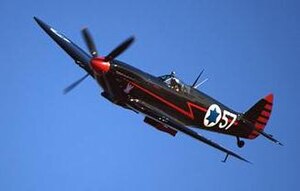 The film received positive reviews be Israeli critics upon it's release, and was picked up for world sales by Global Screen.

Retrieved from "https://en.everybodywiki.com/index.php?title=Sky_Raiders_(2019_film)&oldid=1705038"
Categories:
Hidden categories:
This page was last edited on 10 May 2021, at 07:39.
This page has been accessed 248 times.
Content is available under License CC BY-SA 3.0 unless otherwise noted.
Privacy policy
About EverybodyWiki Bios & Wiki
Disclaimers