Swift spent her childhood in Louisiana. She is Norwegian Irish English French Spanish Filipino.[6] Between the ages of one and fourteen, she suffered sexual abuse at the hands of family members.[5] At the age of about 13, she lived in San Diego, California and attended Bonita Vista Junior High and Bonita Vista High School in Chula Vista, California. At about 19, she worked as a stripper for six months at a club called The Body Shop.[7] 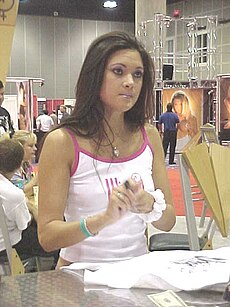 Stephanie Swift at a party in 2006

After earning her degree, she posed in nude modelling photographs for five years and was featured in Club International and Hustler magazine.[7][8] Swift segued from nude model work to Southern California's adult film industry, where she began her career in 1995.[7] Her first softcore scene was in Playboy TV's Up Close and Dangerous.[7] Her first hardcore sex scene was in Space Sirens.[7] She went on to win several awards, including the AVN Female Performer of the Year Award in 1998.[9] She was, for a period, a contract girl with Wicked Pictures.[7]

She has made appearances on the exotic dancing circuit as a featured performer.[10] In 2004, she launched her own production company called Swift Entertainment, in which she was a director, screenwriter and producer.[7]

In 2011, Swift released a video filmed for XXXchurch.com in which she said her cancer had been in remission since March 2010, and she explained her decision to quit the adult film industry. She said the industry gives a "false sense of accomplishment." She is currently working with the church in their efforts to reach out to pornographic film actors.[4][5]

An August 2009 XBIZ press release announced that Swift had been diagnosed with breast cancer in her left breast and asked for donations to help with her medical bills.[11] Later that month, she had a double mastectomy.[12] By March 2010, she had completed chemotherapy and scheduled lymph node surgery.[13]

Share
Retrieved from "https://en.everybodywiki.com/index.php?title=Stephanie_Swift&oldid=2142657"
Categories:
Hidden categories:
This page was last edited on 8 November 2021, at 19:42.
Content is available under License CC BY-SA 3.0 unless otherwise noted.
This page has been accessed 2,322 times.
Privacy policy
About EverybodyWiki Bios & Wiki
Disclaimers