Hazrat Peer Syed Shah Abdul Haq Gilani (commonly known as Chotay Lalajee) was born on Friday, the 16th of April 1926 (Shawal 3, 1345 A.H.) at Golra Sharif, the then district Rawalpindi (now it is in District Islamabad, Pakistan). He was named as “Shah Abdul Haq” by his grandfather Peer Meher Ali Shah. He is the son of Syed Ghulam Mohiyyuddin Gilani alias Babuji and is the current Sajjada Nasheen of Shrine Golra Sharif in Islamabad Pakistan. [1]

He with his elder brother Syed Ghulam Moin ud din (commonly known as Elder Lala jee) got their education from Qari Ghulam Muhammad Peshawari, the jurist and orator of “Dargah-e-Ghausia Mehria Golra Sharif”. Lalajees completed recitation of the Quran on Monday, 17 August 1936. Both the brothers initiated reading of Arabic books of Dars-e-Nizami from ocean of Islamic knowledge of the time, Hazrat Maulana Muhammad Ghazi, in the same institution. His father chosed Maulana Ghulam Muhammad Ghotavi (Principal Jamia Abbasia, Bahawalpur), a renowned scholar, for accomplishment of religious knowledge of both his sons. Accordingly, both the brothers were admitted in Jamia Abbasia Bahawalpur (now known as Islamia University) in 1938 and were educated under supervision of the Principal of the Jamia. After getting education for seven years in Bahawalpur, Lalajee got education in Sikandar Nama and from Sarf Ghotavi to Salam-ul-Uloom, up to 1944. His education was completed by the Principal in the Shrine of Golra Sharif.[2]

His father specially educated him in religious, ethics, spiritual education, public service, hosting the guests of the shrine and following Shariah and Tareeqat. After demise of his father, all responsibilities of Shrine, Golra Sharif were laid on the shoulders of both the brothers which they performed with great sobriety and affection. He was married in the family of descendents of Baba Fariduddin Masud Ganjshakar of Pakpattan Sharif. 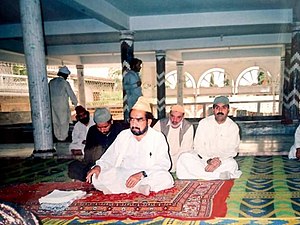 After demise of his brother, heavy burden of matters and thematic engagements relating to Shrine Golra Sharif has been laid on his shoulders, which are being accomplished by him. As known by his followers he is a composition of sincerity, love, sobriety and dignity. He is still the caretaker of the shrine and has thousands of devotees around the world specially Pakistan

He is not able to meet devotees due to illness and old age. People are only allowed to see him through a window everyday at his place near the Shrine of Golra Sharif 3 times a day.

Share
Retrieved from "https://en.everybodywiki.com/index.php?title=Syed_Shah_Abdul_Haq_Gilani&oldid=1625726"
Categories:
Hidden categories:
This page was last edited on 16 April 2021, at 11:47.
Content is available under License CC BY-SA 3.0 unless otherwise noted.
This page has been accessed 9,789 times.
Privacy policy
About EverybodyWiki Bios & Wiki
Disclaimers