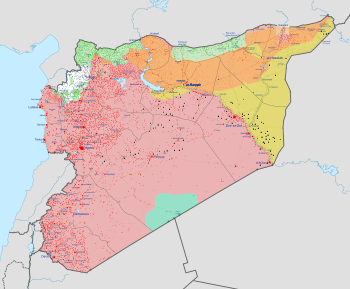 Syrian territories[1] refers to territories de-jure belonging to the Ba'athist Syrian Arab Republic but only partially controlled by it de-facto, with large portions of territories overtaken by various factions during the Syrian Civil War, including the Syrian opposition, Islamist Ahrar al-Sham, the North Syria Federation,[2][3] the Tahrir al-Sham Emirate, the terror group Islamic State of Iraq and the Levant[4] and the Turkish military and their proxy militias.

Other articles of the topic Syrian Civil War : Academy of Health Sciences (Syria)

Other articles of the topic Syria : Syrian Embassy Kuala Lumpur

Other articles of the topic Middle East : Amiria Press
Some use of "" in your query was not closed by a matching "".

Retrieved from "https://en.everybodywiki.com/index.php?title=Syrian_territories&oldid=966273"
Categories:
Hidden categories:
This page was last edited on 18 August 2020, at 08:24.
This page has been accessed 217 times.
Content is available under License CC BY-SA 3.0 unless otherwise noted.
Privacy policy
About EverybodyWiki Bios & Wiki
Disclaimers
Mobile view