Tatratea is a tea-based herbal liqueur, made by Karloff Tatra Distillery in Kežmarok based on traditions from the High Tatra Mountains of Slovakia.[1] Its most-popular drink is Tatratea 52% Original with more than 500,000 bottles sold every year.[2] It is a liqueur range composed of black & white teas, herbs and natural fruit extracts. The Tatratea product family offers 11 flavours, all differing in alcohol by volume.[3][4]

Originally known as Tatranský čaj, the Tatratea brand originates in lodges set in the high altitudes of the High Tatra Mountains.

An old custom is that visitors to chalets high in the Tatra Mountains were welcomed in from the cold with hot herbal tea doused in a concentrated alcohol.[1]

This hot herbal tea formed the base for Tatratea.

Tatratea brand was founded at the beginning of 2003 by Ján Semaňák after he decided to supply the tea in Slovakia.[5]

At the end of 2003, after one year of development, the first Tatratea liqueur was launched in the market.[6] Sales figures being promising, Ján Semaňák began, the next year, large-scale production.[5]

Tatratea became a six-flavour lineup and is now considered a Slovak national drink.[7]

The whole liqueur range is distributed in more than a dozen countries.[8] 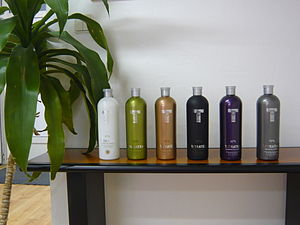 Tatratea 22% Coconut is one of the lowest alcohol content spirit of the whole Tatratea liqueur range. A 44 proof spirit launched at the beginning of the year 2012 ; the last Tatratea addition.[citation needed]

Tatratea 32% Citrus is designed, according to Tatratea, for “soccer moms and an older crowd,” considering its “paltry” 64 proof makeup.[9]

Tatratea 42% Peach and White, with 84 proof, is probably the sweetest liqueur of Tatratea range. A frequently used spirit in fruity cocktails.[9]

Tatratea 62% Forest Fruit is a stronger recipe of Tatratea 52% Original. A 124 proof liqueur with mixed-berry sweetness.[9][10]

Tatratea 72% Outlaw is the same composition as the 52% but with less sugar and more alcohol in it.[9]

Made of cream and Tatratea 52% Original.

Enriched with aronia and acai extracts. Acai is a berry growing on palm trees in the region of the Amazon rainforest with a taste similar to a mixture of forest fruit and chocolate. Aronia is a fruit with a slightly astringent flavor.

Enriched with red tea, hibiscus and sour cherry extracts. Hibiscus is a plant native to the tropical parts of Asia: it has high edible flowers and is suitable for the preparation of tea with a slightly sour taste and a beautiful ruby color.

Tea-based herbal digestif with no added sugar, sweetened with extracts from raisins, figs and stevia. It contains extracts from more than 30 herbs, primarily milk thistle, elderflower and yarrow.

Tea-based herbal bitter with no sugar added, sweetened with extracts from raisins, figs and stevia. It is made from extracts of more than 30 herbs, especially wormwood, gentian and motherwort.

This is a list of prizes displayed on Tatratea packaging:

Tatratea can be used to make cocktails. This index displays the cocktail collection promoted by Tatratea :

This article "Tatratea" is from Wikipedia. The list of its authors can be seen in its historical and/or the page Edithistory:Tatratea. Articles copied from Draft Namespace on Wikipedia could be seen on the Draft Namespace of Wikipedia and not main one.

Share
Retrieved from "https://en.everybodywiki.com/index.php?title=Tatratea&oldid=1152338"
Categories:
Hidden categories:
This page was last edited on 3 December 2020, at 09:49.
Content is available under License CC BY-SA 3.0 unless otherwise noted.
This page has been accessed 15,226 times.
Privacy policy
About EverybodyWiki Bios & Wiki
Disclaimers