The Components are an American alternative rock band from New Jersey.

The Components are an alternative and grunge rock band from Jersey City, New Jersey. Guitarist and vocalist Ronnie Sena and drummer Zoe Ekonomidis were previously in a band, called Asphalt Grey. During that period, Sena recorded songs independently, releasing a five-track EP entitled Chasing Colors under a ""fake" band called the Components."[1] After Asphalt Grey broke up in late 2016, Sena and Ekonomidis continued playing, and in an interview with The Jersey Journal Sena recalls "Zoe and I had this amazing chemistry from the first time we played together so we knew we wanted to keep going."[2]

The two rejoined as the Components, in January 2017. Their music is described as "barrage of chorded guitar, energetic vocals and clobbering beats," and Sena claims classic blues as the their biggest inspiration, along with the Arctic Monkeys, Built to Spill and the White Stripes.[3][2] The band's live presence is described as "electrifying", and in 2017 The Components won the Jersey City Battle of the Bands, which landed them a deal with independent record label Mint 400 Records, and high-profile gigs.[1][4][5] 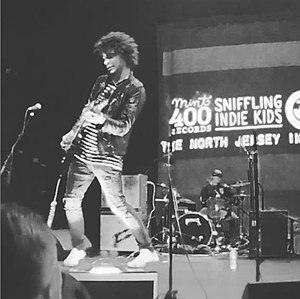 The Components at the 2018 North Jersey Indie Rock Festival.

Their debut full-length, Continuum, was released on Mint 400 Records on 19 January 2018.[2] Joe Wawryzniak form Jersey Beat describes Continuum as "robust shouted vocals, incendiary guitar riffs, fat throbbing basslines, and fierce pile driving drums," and a "totally kick-ass blast of pure sweaty'n'sinewy noise and fury."[6] Music journalist Jim Testa named Continuum No. 10 on his list of the Top 10 Hudson County Records of 2018.[5] A review by Spill compares the album to the music of the Foo Fighters, and Royal Blood, and notes "their attention to melody not only adds another dimension to the record, but it creates a much richer listening experience, further adding to the bands unique style that is largely driven by punk stylings, but features a number of rock based elements."[7] On 6 October 2018, the Components performed at the North Jersey Indie Rock Festival.[8]

Retrieved from "https://en.everybodywiki.com/index.php?title=The_Components&oldid=461467"
Categories:
Hidden categories:
This page was last edited on 21 May 2019, at 06:28.
This page has been accessed 185 times.
Content is available under License CC BY-SA 3.0 unless otherwise noted.
Privacy policy
About EverybodyWiki Bios & Wiki
Disclaimers