The festival was created by Sniffling Indie Kids co-founder Frank DeFranco and Mint 400 Records founder Neil Sabatino, in 2016.[1] It has been hosted by many of the state's music magazines, websites and radio, including The Aquarian Weekly, Jersey Beat, Speak Into My Good Eye, and WFDU.[2] The labels were both working on the album Creases when they were formerly introduced. Sabatino recalls in an interview with Bob Makin of Courier News, that the labels "had done a ton of local shows together and [we] saw the opportunity to do a showcase on a much larger scale[;] in the past, Mint 400 tried to do a showcase at least once a year of our local acts always at Maxwell's under the old owners," and DeFranco noted the desire to create a "festival like this because [he felt] the North Jersey scene had been overlooked by similar festivals in Asbury Park and New Brunswick."[3][4]

The first festival took place at Cathedral Hall, formerly St. Bridget's Church, a converted ornate Roman Catholic monastery, on September 10, 2016.[5][6] The performances alternated between two stages, one upstairs on the deconsecrated altar and the other downstairs in the church's former recreation hall.[7] It was hosted by 4th Street Arts, Rock-It Docket, BGT Enterprises, Artist & Makers Market, BlowUpRadio, Jersey Beat, Speak Into My Good Eye, The Aquarian Weekly, The Alternative, Jersey Indie, You Don't Know Jersey, and Courier News. The festival began at 12:00 and ended at 8:00 P.M., and featured crafts, food, beer and spirits.[8] The festival showcased twenty bands from the Mint 400 Records and Sniffling Indie Kids rosters with twenty-minute sets alternating one after the other, from the upstairs church to the downstairs community center. The artists that performed were Ancient Babies, the Bitter Chills, the Clydes, C.R. and the Degenerates, dollys, Ken De Poto, Fairmont, LKFFCT, the Maravines, NGHTCRWLRS, Pixl-Visionary, Quality Living, Rocky & the Chapter, Sink Tapes, Toy Cars, Tri-State, Underlined Passages, Shane Vidaurri, YJY, and Young Legs.

Approximately five-hundred people attended the concert, and DeFranco notes "everyone got to play to a good crowd, and everyone I talked to had a really good time."[5][7] A live review by Speak Into My Good Eye editor Mike Mehalick says "all in all, it was a beautifully run indie fest going off without any real hitches. Kudos to Sniffling Indie Kids and Mint 400 for putting The North Jersey Indie Rock Festival and to all of the bands and fellow media sponsors who made the day so much fun."[9] Jim Testa called the festival "a much-needed shot-in-the-arm for the area's music scene."[5]

New Jersey Racket calls the 2017 festival "a representation of the entire indie community," adding "what made it work was the passionate input of everyone involved, and having been able to share in that experience only makes me more psyched for what the next year will bring."[11] 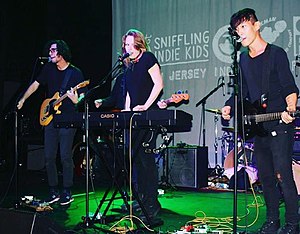 Retrieved from "https://en.everybodywiki.com/index.php?title=North_Jersey_Indie_Rock_Festival&oldid=461197#NJ_.2F_NY_Mixtape"
Categories:
Hidden categories:
This page was last edited on 20 May 2019, at 22:14.
This page has been accessed 539 times.
Content is available under License CC BY-SA 3.0 unless otherwise noted.
Privacy policy
About EverybodyWiki Bios & Wiki
Disclaimers