Not to be confused with Steal (basketball). 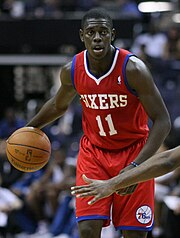 Jrue Holiday (top) stole the ball from Devin Booker (bottom) with 16 seconds left in Game 5 of the 2021 NBA Finals.

The Steal was a defensive basketball play that occurred in Game 5 of the 2021 NBA Finals, played between the Milwaukee Bucks and the Phoenix Suns on July 17, 2021 at Footprint Center in Phoenix, Arizona. With the Milwaukee Bucks leading 120-119 with 16 seconds left in the game, Jrue Holiday stole the ball from Devin Booker and passed the ball to Giannis Antetokounmpo for an alley-oop to put the Bucks ahead 122-119.[1][2]

The Phoenix Suns, who entered the 2020-21 NBA season with a 10-year playoff drought and having a .302 winning percentage in the last five seasons, which is the worst winning percentage in the five years prior for a team advancing to the final playoff round in any of the four major American professional sports leagues,[3][4], acquired All-Star Chris Paul from the Oklahoma City Thunder by trading away Ricky Rubio, Kelly Oubre Jr., and a future first-round draft pick,[5] and made their first NBA Finals appearance since 1993 and were seeking for their first NBA Championship in franchise history. The Milwaukee Bucks, after finishing with the league's best record in the prior two seasons before suffering disappointments in the playoffs, acquired Jrue Holiday from the New Orleans Pelicans in a four-team trade, surrendering a bounty in starting point guard Eric Bledsoe, George Hill, the rights to R. J. Hampton, and a package of future draft picks,[6] and made their first NBA Finals appearance since 1974 and were seeking to end a 50-year title drought by winning their first NBA Championship since 1971.[7]

The Phoenix Suns made 14 out of 19 shots in the first quarter, including a stretch where they made 11 consecutive shots, to take a 37-21 lead after the first quarter.[1][2] The Milwaukee Bucks would then outscore the Phoenix Suns 21-5 to start the second quarter to tie the game at 42-42 on a Pat Connaughton 3-pointer with 7:48 left in the first half.</ref>[2] The Milwaukee Bucks would continue on for 43 points in the second quarter, which is an NBA Finals record for most points scored in a quarter by a road team, to take a 64-61 lead at halftime.[1] The Milwaukee Bucks would then use their 62.1% shooting percentage through the first three quarters, which rivaled the Orlando Magic's 62.5% shooting percentage in Game 3 of the 2009 NBA Finals for the NBA Finals single-game shooting percentage record, to take a 100-90 lead after the third quarter. The Milwaukee Bucks took a 108-94 lead after Jrue Holiday's basket with just over nine minutes remaining in the game, but the Phoenix Suns mounted a comeback to cut the deficit to 120-119 with less than a minute remaining.[2]

After a Jure Holiday miss with 31.9 seconds left in the game, Devin Booker got the rebound and dribbled the ball upcountry himself. He stopped and pivoted in the paint, when Jrue Holiday forcefully pulled the ball from his hands for the steal.[12][13] After initially intending to run down the clock,[14] Jrue Holiday passed the ball to Giannis Antetokounmpo, who was also fouled on the play by Chris Paul, for the alley-oop to put the Bocks ahead 122-109 with 13.5 seconds left.[12][13]

Rest of the Game[edit]

While Giannis Antetokounmpo missed his free throw[2], he volleyed the ball back for an offensive rebound by Khris Middleton, who was fouled immediately. Khris Middleton would then make one of two free throws to put the Bucks ahead 123-119.[13] The Bucks would hold off the Suns on their final possession to win the game 123-119 and take a 3-2 lead in the NBA Finals.

The Milwaukee Bucks would go on to win Game 6 105-98 led by Giannis Antetokounmpo's 50 points (which tied a Finals record for the most scored by a player in a series-clinching game, set by Bob Pettit of the St. Louis Hawks in 1958.[15][16]), 14 rebounds, and five blocks to win their first NBA Championship since 1971 and end their 50-year NBA Championship drought.[17][18] Giannis Antetokounmpo was named the NBA Finals MVP for his dominant performances in the NBA Finals, becoming the youngest player to be named NBA Finals MVP at age 26 since Kawhi Leonard (22) in 2014[19]

Retrieved from "https://en.everybodywiki.com/index.php?title=The_Steal_(basketball)&oldid=1839613"
Categories:
This page was last edited on 26 July 2021, at 19:08.
This page has been accessed 37 times.
Content is available under License CC BY-SA 3.0 unless otherwise noted.
Privacy policy
About EverybodyWiki Bios & Wiki
Disclaimers
Dark mode