Tom and Jerry Special Shorts is an American animated television series based on Tom and Jerry that premiered on HBO Max on February 20, 2021.[1] The series is developed by Peter Browngardt and produced by Warner Bros. Animation. The shorts features the archived uncredited voices of William Hanna and Joseph Barbera alongside Andrew Dickman.

The shorts are featured in the style of Looney Tunes Cartoons, another short series developed by Browngardt. 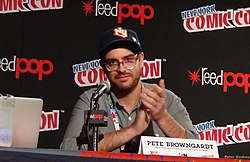 Peter Browngardt developed the shorts after doing so for Looney Tunes Cartoons.

In February 2021, the shorts debuted on HBO Max unexpected. Thought to be promotional marketing for the Tom & Jerry film, the shorts received positive reception from fans and critics.[citation needed][1]

Others articles of the Topics United States AND Cartoon : The Nutshack, Hazbin Hotel, Helluva Boss, The Loud House, Technodrome, The Casagrandes

Others articles of the Topics Television AND Cartoon : The Casagrandes, The Nutshack, Technodrome, The Loud House, Infinity Train: Book 1 (Original Soundtrack), Ren and Stimpy

Share
Retrieved from "https://en.everybodywiki.com/index.php?title=Tom_and_Jerry_Special_Shorts&oldid=2231218"
Categories:
Hidden categories:
This page was last edited on 2 January 2022, at 10:03.
Content is available under License CC BY-SA 3.0 unless otherwise noted.
This page has been accessed 1,046 times.
Privacy policy
About EverybodyWiki Bios & Wiki
Disclaimers