University of the Punjab

From EverybodyWiki Bios & Wiki
Jump to:navigation, search
Not to be confused with Panjab University, Chandigarh, India.
For other uses, see Punjab University.

The University of the Punjab[10] was given its initial impetus in 1854 by Wood's despatch. Gottlieb Wilhelm Leitner was the founder of the university. Contrary to the three previously established universities, which were only examining institutions, the University of the Punjab was both a teaching as well as an examining body right from the beginning.

From its formation in 1882 until 1947, the University of the Punjab served the educational needs of the entire region of pre-independence Punjab and northern India. Mohindra College, Patiala was the first college of higher learning to affiliate with University of Punjab in 1882; followed by St. Stephen's College, Delhi. The independence of Pakistan in 1947 reduced the geographical jurisdiction of the university, as it was split into two separate universities in the respective countries. The Indian portion of the university is referred to as Panjab University, Chandigarh, India. The current Institute of Administrative Sciences was created in 1962.

Many major institutions that were previously affiliated to Punjab University have now become independent universities on their own, such as Government College University, Lahore and Medical and Engineering Colleges. [11]

The University of the Punjab is divided into several campuses across Punjab with one summer campus located in Khyber Pakhtunkhwa:[5]

At present, Punjab University has 28 hostels 17 for male and 11 for female students. Most of these students are accommodated in the dorms at the Quaid-e-Azam Campus. Total number of hostel residents is 6961.

There are 58 Buses for students, teachers & staff on 41 routes within the city and a whole day quarter-hourly service between Allama Iqbal Campus and Quaid-i-Azam Campus. To meet the running cost of University buses, a nominal amount is charged from different categories of students and employees.

Over Six thousand employees of the University and their families including widows, mothers and children are entitled to free medical treatment. Medical facilities are also available to retired employees and their families. The University has its own Radiology, Biochemistry, Pathology Departments and Dental Clinic with a full-time Dental Surgeon. Day and Night medical services are available to the residents on the Quaid-e-Azam Campus of the University. The clinics are working both at the Allama Iqbal and Quaid-e-Azam Campuses. More than 600 patients visit the University clinics daily. Emergency services are also available. The University helps to provide treatment in local Government hospitals for seriously ill patients.

A variety of sports facilities including playing fields for cricket, hockey, football and athletics, a swimming pool for male students, squash courts and indoor game facilities in the hostels are available at the Quaid-e-Azam Campus. Playing fields for various sports and a female swimming pool are provided near the Allama Iqbal Campus. Boat Club provides recreational as well as competitive rowing facilities at the canal of the Quaid-e-Azam Campus as well as the River Ravi, in the north of the city.

The sports facilities for male and female students are managed by the respective sports offices. Each year competitive sports for both male and female students are organized at inter-departmental, inter-collegiate and inter-university levels in a variety of sports like hockey, football, cricket, badminton, athletic, etc. To encourage development of sports, scholarships are awarded to the outstanding players, and winners of the sporting events are awarded prizes, trophies and medals.

Statue of Alfred Cooper Woolner, former Vice-Chancellor of the University of the Punjab, outside Old Campus

There are 13 faculties in the University with 10 constituent colleges, 73 departments, centres, and institutes. It has 1006 full time and 300 part time faculty members involved in teaching/research and over 6,000 non-teaching/supporting staff with 45,678 on campus students (27,907 Morning Students, 16,552 Evening Students and 1,219 Diploma Students) :[18] 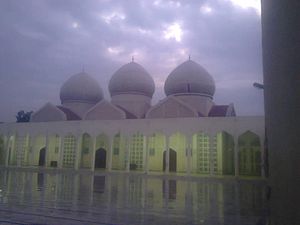 Punjab University Library is one of the largest libraries among the universities of Pakistan. The library has more than 500,000 books, magazines and periodicals in its collection. This collection is in nine different national and international languages and different types as print material, CDs, DVDs, Microfilms, Microfiches, Video and Audio Cassettes and Manuscripts.[19] Punjab University Library has two-storey building and total area of the building is 102,000 sq. feet. There are reading halls in both ground and 1st floor with approximately seating capacity of 2500 readers. The library has internet lab for the students to research according to the new technologies of 21st century. In the library there is computerised "MLIMs" catalogue for searching material.[20]

Main article: List of University of the Punjab people

Retrieved from "https://en.everybodywiki.com/index.php?title=University_of_the_Punjab&oldid=536042"
Categories:
Hidden categories:
This page was last edited on 25 September 2019, at 05:49.
This page has been accessed 240 times.
Content is available under License CC BY-SA 3.0 unless otherwise noted.
Privacy policy
About EverybodyWiki Bios & Wiki
Disclaimers
Mobile view