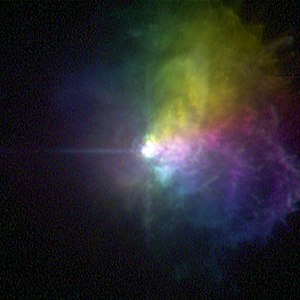 VY Canis Majoris is an extreme red hypergiant of spectral class of M2.5-5Iae located in the constellation Canis Major, it lies approximately 3,840 light years away from Earth, and is also the largest known star by size. It was discovered by 20x22px French astronomer Jerome Lalande (wikipedia) on 7 March 1801.

VY CMa has an effective temperature below 4,000°K, placing it at the upper-right hand corner of the Hertzsprung–Russell diagram and meaning it is a highly evolved star. During its main sequence, it was an O-type star, having an initial mass of 25 times that of the sun.

VY Canis Majoris is a candidate for being the largest star discovered[1] so far in the universe (though it could be surpassed by Westerlund 1-26) with a very large diameter of 2,200 times greater than the Sun (= 3.064 billion kilometers; 1.9 billion miles; 20.5 AU), corresponding to a volume approximately 11 billion times greater than the Sun (Figure 1). If placed at the center of the Solar System, it would at least engulf the orbit of Saturn. If a passenger airplane fly along VY CMa's surface at 900 km per hour, it would take over 1,200 years to circle it once. It is so large that if Earth had the diameter of a beach ball of 20 cm, the Sun would be 22 meters and VY CMa would be more than 50 km.

It is also one of most luminous cool hypergiants with a luminosity approximately 300,000 times greater than the Sun's.

VY CMa is a very unstable star who has thrown off much of its mass into its surrounding nebula. In approximately 100,000 years, it will likely have exploded in a powerful hypernova (Superluminous supernova), with a luminosity more than 100 times brighter than that of a standard supernova but before, it will first shrink, becoming a yellow hypergiant, then a luminous blue variable, and finally a Wolf-Rayet star. After exploding into a hypernova, it will definitely end up in a black hole.

Retrieved from "https://en.everybodywiki.com/index.php?title=VY_Canis_Majoris&oldid=58669"
Categories:
Hidden category:
This page was last edited on 9 August 2018, at 06:51.
This page has been accessed 254 times.
Content is available under License CC BY-SA 3.0 unless otherwise noted.
Privacy policy
About EverybodyWiki Bios & Wiki
Disclaimers
Mobile view