VidCon is a multi-genre online video conference, held annually in Southern California since 2010. Originally conceived by Hank and John Green of the Vlogbrothers YouTube channel, the convention is the largest of its kind in the world, gathering thousands of online video viewers, creators, and industry representatives worldwide.[2][3][4] In February 2018, Viacom acquired VidCon, although the conference remains a standalone subsidiary.[5] Its offices remain in Missoula, Montana, sharing a building with Complexly. 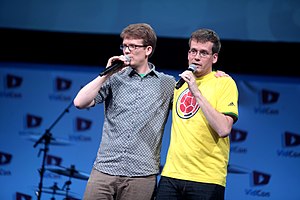 The first VidCon was held in July 9–11, 2010 at the Hyatt Regency Century Plaza hotel in Los Angeles and sold out in advance[6] with over 1,400 people attending.[7] The first day featured industry panels and presentations by industry leaders and video creators. The second and third day featured main stage presentations by YouTube's content creators, breakout sessions and concerts featuring musicians who achieved success primarily by presenting their music via online videos.[8]

The Gregory Brothers at VidCon 2012

VidCon 2013 was held in August 1–3, 2013 at the Anaheim Convention Center. The conference sold out a month in advance with attendance reaching 12,000 people.[15] YouTube signed a deal in 2013 to become the principal sponsor of VidCon for two years.[16]

There were various concerts during the convention including We The Kings and Meghan Tonjes.

VidCon 2015 took place on July 23–25, 2015, at the Anaheim Convention Center.[18] The number of people attending was limited, so there would only be slightly more people than in 2014. However, the space was enlarged, with the convention taking up the entire Convention Center.[19] There were over 300 YouTube creators who performed, exhibited and connected with the attendees. Troye Sivan announced his new EP, WILD.

VidCon 2015 used a new system for fans to meet the creators, requiring Community members to sign up a month in advance to meet specific creators.[20]

VidCon 2016 was held from June 23–25 at the Anaheim Convention Center.[21] The convention announced plans to tighten security at its events in the wake of singer Christina Grimmie's shooting and the Orlando nightclub massacre. Security measures included the addition of metal detectors, enhancing the number of security officers and banning informal meet-and-greets between community members and YouTubers after panels.

2017 (8th annual VidCon US, addition of other VidCons)[edit]

VidCon Europe debuted from April 7–9, 2017, at the Amsterdam RAI Exhibition and Convention Centre in Amsterdam.[22]

VidCon Australia debuted on September 9–10, 2017, at the Melbourne Convention & Exhibition Centre in Melbourne.[24]

VidCon Europe was held from March 22–24, 2018, at the Mövenpick Hotel Amsterdam.[25] Unlike 2017, VidCon Europe 2018 did away with the Community badge, only selling Creator and Industry badges. This was the result of "evaluated feedback" of Community Track attendees from 2017. VidCon sought to "leverage [its] success with the creator and industry communities and continue to build an independent gathering to expand the cross-cultural YouTube and online video movement across Europe."[26]

VidCon US was held from June 20–23, 2018, at the Anaheim Convention Center.[27] This was the first year VidCon implemented the use of RFID wristbands.[28]

In February 2018, Viacom (owner of the Viacom Media Networks and film studio Paramount Pictures) announced that they were acquiring VidCon, as part of its efforts to expand its live-events business, and to expand from TV programming to next-generation entertainment platforms. Jim Louderback will remain as the CEO of the convention, and co-founder Hank Green will continue be involved and work closely with the team. Its offices will also remain in Missoula, Montana.[30][31] Internet reception to this acquisition was mixed, with some noting the irony of Viacom acquiring VidCon a decade after their lawsuit against Google and YouTube for copyright infringement. Hank Green reassured fans that Viacom's acquisition will allow the convention to flourish.[32]

VidCon attendees may purchase one of three types of passes, also called badges or tracks, a system rolled out during the 2015 VidCon. At the lowest price, the Community track allows access to the main floor of the Anaheim Convention Center, several stages, the signing and photo hall, the Expo Hall, and more. The second type is the Creator track, which is geared more toward members of the online video community who either produce content themselves or have an interest in doing so. This pass gives access to the main and second floor of the venue and creator lounges, which feature panels, workshops, and keynotes that focus on the specifics of creating and editing online video. The third and most expensive type is the Industry track, which gives attendees the chance to attend all VidCon events and enjoy the industry lounge. This badge is mainly designed for those in the online video business,[34] with access to keynote conversations, round-table discussions, hands-on training and platform and product demonstrations. Vidcon provided the industry members with a private zone to relax away from the attendees.[35]

VidCon has a list of featured creators who are invited to the convention and who participate in panels, concerts, and more.[36] These online content creators have access to all events at VidCon as well as the industry lounge, similarly to the Industry track.

People with disabilities are offered assistance throughout the convention. Special accessible seating is provided along with ASL interpreters present in the arena and main stage.[37]

After being reportedly snubbed and restricted at past VidCon events, YouTube star Tana Mongeau decided to create her own convention, TanaCon (deemed by some to be the Anti-VidCon).[40] While this move was initially applauded by fans and fellow YouTubers (who had also took issue with VidCon's past handling of creators), TanaCon 2018 was ultimately deemed a failure. The event took place at the Anahemin Marriott Suites, a hotel situated in the Anahemin Convention Center complex during the same weekend as VidCon 2018. Reportedly, over 20,000 fans showed up for a venue that only held 1,150 (an oversight exacerbated by the pre-sale of 5,000 tickets).[41] The event was shut down by police, with many receiving first-degree and second-degree sunburns from standing outside waiting in LA's June heat. At least one attendee had to be hospitalized, following an injury that occurred during a door rush in the overcrowded hotel.[42] Starting in July, fans began to receive refunds for pre-sale tickets, however some were still considering filing a class-action lawsuit against GoodTimes Entertainment, the financial backer for TanaCon, in order to recoup lossing made from travel and accommodation for the event.[43]

Share
Retrieved from "https://en.everybodywiki.com/index.php?title=VidCon&oldid=269608"
Categories:
Hidden categories:
This page was last edited on 22 December 2018, at 03:13.
Content is available under License CC BY-SA 3.0 unless otherwise noted.
This page has been accessed 2,266 times.
Privacy policy
About EverybodyWiki Bios & Wiki
Disclaimers