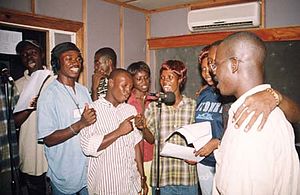 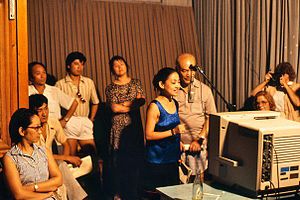 Actors dubbing a television show in China while visitors look on, 1987

Performers are called voice actors or actresses, voice artists or voice talent. Their roles may also involve singing, although a second voice actor is sometimes cast as the character's singing voice. Voice acting is recognised in Britain as a specialized dramatic profession, chiefly owing to the BBC's long tradition of radio drama.[1]

Voice artists are also used to record the individual sample fragments played back by a computer in an automated announcement.

The voices for animated characters are provided by voice actors. For live action productions, voice acting often involves reading the parts of computer programs, radio dispatchers, or other characters who never actually appear on screen. With a radio drama or Compact Disc drama, there is more freedom in voice acting, because there is no need to match a dub to the original actors, or to match an animated character.

Producers and agencies are on the look out for many styles of voices such as booming voices, which may be perfect for more dramatic productions or cute, young sounding voices that are perfect for trendier markets.

Some just sound like regular, natural, everyday people and all of these voices have their place in the Voiceover world, provided they are used correctly and in the right context.[2]

In the context of voice acting, narration is the use of spoken commentary to convey a story to an audience.[3] A narrator is a personal character or a non-personal voice that the creator of the story develops to deliver information to the audience, particularly about the plot. The voice actor who plays the narrator is responsible for performing the scripted lines assigned to the narrator.

In traditional literary narratives (such as novels, short stories, and memoirs), narration is a required story element; in other types of (chiefly non-literary) narratives, such as plays, television shows, video games, and films, narration is merely optional.[citation needed]

One of the most common uses for voice acting is within commercial advertising. The voice actor is hired to voice a message associated with the advertisement. This has different sub-genres; television, radio, cinema, and web-advertising. The sub-genres are all different styles in their own right. For example, television commercials tend to be voiced with a narrow, flat inflection pattern (or prosody pattern), whereas radio (especially local radio) commercials tend to be voiced with a very wide inflection pattern in an almost over-the-top style.

Marketers and advertisers use voice-over all over their projects, from radio, to TV, to online and more! Total advertising spend in the UK is forecast to be £21.8 billion in 2017.[4]

Voice-over used in commercial adverts also is the only area of voice acting where de-breathing is used.[5] De-breathing means artificially removing breaths from the recorded voice. This is done to stop the audience being distracted in any way from the commercial message that is being put across.[citation needed]

Dub localization is a type of voice-over. It is the practice of voice-over translation altering a foreign language film, art film or television series by voice actors.

Voice-over translation is an audiovisual translation[6] technique, in which, unlike in Dub localization, actor voices are recorded over the original audio track, which can be heard in the background. This method of translation is most often used in documentaries and news reports to translate words of foreign-language interviewees.[citation needed]

Automated dialogue replacement (ADR) is the process of re-recording dialogue by the original actor after the filming process to improve audio quality or reflect dialogue changes (also known as "looping" or a "looping session").[7][8] ADR is also used to change original lines recorded on set to clarify context, improve diction or timing, or to replace an accented vocal performance. In the UK, it is also called "post-synchronization" or "post-sync".[citation needed]

Voice artists are also used to record the individual sample fragments played back by a computer in an automated announcement. At its simplest, each recording consists of a short phrase which is played back when necessary, e.g. the "Mind the gap" announcement introduced by London Underground in 1969. In a more complicated system, such as a speaking clock, the announcement is re-assembled from fragments such as "minutes past" "eighteen" and "p.m." For example, the word "twelve" can be used for both "Twelve O'Clock" and "Six Twelve."

Automated announcements can also include on-hold messages on phone systems and location-specific announcements in tourist attractions.

Voice actor (Japanese: 声優, Hepburn: Seiyū) occupations include performing roles in anime, audio dramas and video games, performing voice-overs for dubs of non-Japanese movies, and providing narration to documentaries and similar programs. Because the animation industry in Japan is so prolific, voice actors in Japan are able to have full-time careers as voice-over artists. Japanese voice actors are able to take greater charge of their careers than voice actors in other countries. Japan has approximately 130 voice acting schools and troupes of voice actors, who work for a specific broadcast company or talent agency. They often attract their own appreciators and fans, who watch shows specifically to hear their favorite actor or actress.

Many Japanese voice actors frequently branch into music, often singing the opening or closing themes of shows in which their character stars, or become involved in non-animated side projects such as audio dramas (involving the same characters in new story lines) or image songs (songs sung in character that are not included in the anime but which further develop the character).

From 1988 to 1994,[11] the United Kingdom banned broadcasting of the voices of people linked to violence in Northern Ireland; television circumvented this using actors' voices synchronized to footage of prohibited people speaking.

Although voice acting is criticized heavily in Brazil, most of the films in the theaters are dubbed in Portuguese, and most Brazilians prefer watching movies in their native language.[which?] Voice acting in Brazil has been highly acclaimed by other countries. Many voice actors are also dubbing directors, people that direct other voice actors, and translators. To become a voice actor in Brazil, you need to be a professional actor and attend dubbing courses. Celebrities in Brazil have done voice acting, although Brazilians generally do not like when celebrities who are not actors do voice acting.[citation needed]

As Colombian Spanish is considered one of the most clear forms of Spanish[by whom?], a great deal of Spanish language voice acting is in Colombia using local voice talent. Colombia voice over services are one of the most popular followed by synchronization and subtitling, according to Alexander Torrenegra .[who?][citation needed]

Across many of the main game-manufacturing countries, in the United States, Canada, the United Kingdom, and Japan, actors often lend their voices to characters in games and some have made a career of it. Their names have sometimes been linked to a particular character they have voiced. Among the many noted video-game voice actors are Maaya Sakamoto (the Japanese voice for the Final Fantasy XIII character Lightning[12]), Tatsuhisa Suzuki (the voice of Noctis Lucis Caelum in Final Fantasy XV), Miyu Irino (the Japanese voice of Sora in the Kingdom Hearts series), David Hayter (Solid Snake and Big Boss of the Metal Gear series), Steve Downes and Jen Taylor (Master Chief and Cortana from the Halo series), Nolan North (Nathan Drake from the Uncharted games and Desmond Miles from the Assassin's Creed game series), Charles Martinet (the voice of Mario, Luigi, Baby Mario, Baby Luigi, Wario, and Waluigi in Nintendo's Mario franchise), Liam O'Brien (the voice of Caius Ballad in Final Fantasy XIII-2 and War in Darksiders), and Jonell Elliot (the voice of Lara Croft from 1999-2003). Other actors more linked with the film, radio or television industry have also voiced video game characters. These actors include Ray Liotta (Tommy Vercetti from Grand Theft Auto: Vice City and Billy Handsome in Call of Duty: Black Ops II), Michael Dorn (various characters from World of Warcraft and Gatatog Uvenk from Mass Effect 2), Kaili Vernoff (Miranda Cowan from Grand Theft Auto V and Susan Grimshaw from Red Dead Redemption 2), Ashley Johnson (Ellie in The Last of Us), Kristen Bell (Lucy Stillman in the first three mainline entries in the Assassin's Creed franchise) and Kelsey Grammer (Sideshow Bob in The Simpsons Game).

Share
Retrieved from "https://en.everybodywiki.com/index.php?title=Voice_actor&oldid=740976"
Categories:
Hidden categories:
This page was last edited on 25 May 2020, at 15:55.
Content is available under License CC BY-SA 3.0 unless otherwise noted.
This page has been accessed 1,095 times.
Privacy policy
About EverybodyWiki Bios & Wiki
Disclaimers