A movie star (also known as a film star and cinema star) is an actor who is famous for their starring, or leading, roles in motion pictures.[1][2] The term is used for actors who are marketable stars and whose names are used to promote movies, for example in trailers and posters.[3] 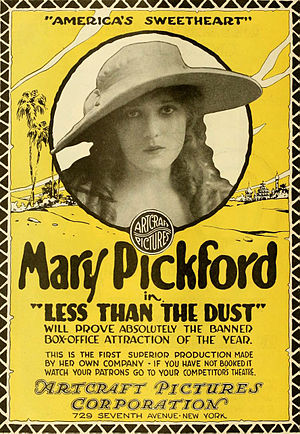 Poster advertising a 1916 film with Mary Pickford, one of the first movie stars

In the early days of silent movies, the names of the actors and actresses appearing in them were not publicized or credited because producers feared this would result in demands for higher salaries.[4] However, audience curiosity soon undermined this policy. By 1909, actresses such as Florence Lawrence and Mary Pickford were already widely recognized, although the public remained unaware of their names. Lawrence was referred to as the “Biograph Girl” because she worked for D. W. Griffith's Biograph Studios, while Pickford was "Little Mary." In 1910, Lawrence switched to the Independent Moving Pictures Company, began appearing under her own name, and was hailed as "America's foremost moving picture star" in IMP literature.[4] Pickford began appearing under her own name in 1911.

The Independent Moving Pictures Company promoted their "picture personalities", including Florence Lawrence and King Baggot, by giving them billing, credits and a marquee. Promotion in advertising led to the release of stories about these personalities to newspapers and fan magazines as part of a strategy to build brand loyalty for their company's actors and films. By the 1920s, Hollywood film company promoters had developed a "massive industrial enterprise" that "...peddled a new intangible—fame."[5] Early Hollywood studios tightly controlled who was a movie star, as only they had the ability to place stars' names above the title; according to film historian Jeanine Basinger, this was done "only for economic reasons".[6]

Hollywood "image makers" and promotional agents planted rumors, selectively released real or fictitious biographical information to the press, and used other gimmicks to create glamorous personas for actors. Publicists thus "created" the "enduring images" and public perceptions of screen legends such as Judy Garland, Rock Hudson, Marilyn Monroe, and Grace Kelly. The development of this "star system" made fame "something that could be fabricated purposely, by the masters of the new 'machinery of glory'."[5] However, regardless of how "...strenuously the star and their media handlers and press agents may ... try to 'monitor' and 'shape' it, the media and the public always play a substantial part in the image-making process."[5] According to Madow, "fame is a 'relational' phenomenon, something that is conferred by others. A person can, within the limits of his natural talents, make himself strong or swift or learned. But he cannot, in this same sense, make himself famous, any more than he can make himself loved."

Madow goes on to point out "fame is often conferred or withheld, just as love is, for reasons and on grounds other than 'merit'." According to Sofia Johansson the "canonical texts on stardom" include articles by Boorstin (1971), Alberoni (1972) and Dyer (1979) that examined the "representations of stars and on aspects of the Hollywood star system". Johansson writes that "more recent analyses within media and cultural studies (e.g. Gamson 1994; Marshall 1997; Giles 2000; Turner, Marshall and Bonner 2000; Rojek 2001; Turner 2004) have instead dealt with the idea of a pervasive, contemporary, 'celebrity culture'." In the analysis of the celebrity culture, "fame and its constituencies are conceived of as a broader social process, connected to widespread economic, political, technological and cultural developments."[7]

In the 1980s and 1990s, entertainment companies began using stars for a range of publicity tactics including press releases, movie junkets, and community activities. These promotional efforts are targeted and designed using market research, to increase the predictability of success of their media ventures. In some cases, publicity agents may create “provocative advertisements” or make an outrageous public statement to trigger public controversy and thereby generate "free" news coverage.[5] Movie studios employed performers under long-term contracts. They developed a star system as a means of promoting and selling their movies. "Star vehicles" were filmed to display the particular talents and appeal of the most popular movie stars of the studio.

Two movie stars, Sophie Marceau and Zhang Ziyi, respectively from France and China, at the Cabourg Film Festival in June 2014.

Movie stars in other regions too have their own star value. For instance, in Asian film industries, many movies often run on the weight of the star's crowd pulling power more than any other intrinsic aspect of film making.

A number of Chinese film actors have become some of the most popular movie stars in Eastern Asia, and several are also well known in the Western world. They include Jackie Chan, Jet Li, Chow Yun-fat, Stephen Chow, Sammo Hung, Gong Li, Ziyi Zhang, Maggie Cheung, and the late Bruce Lee. 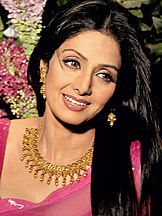 Amitabh Bachchan and Sridevi, are regarded as one of the biggest and most influential movie stars of all-time.[by whom?]

Some mainstream Indian movie stars, like the Khans of Bollywood (Aamir Khan,[8] Shah Rukh Khan, Salman Khan, Dilip Kumar), Raj Kapoor, Nargis,[9] Mithun Chakraborty,[10] Amitabh Bachchan and Aishwarya Rai gained international fame across Asia[11][12][13] and Eastern Europe.[14][15] For example, Bollywood films were popular in the Soviet Union, more so than Hollywood films[16] and occasionally even domestic Soviet films.[17] Indian actors like Raj Kapoor, Nargis[18] and Mithun Chakroborty were household names in the Soviet Union,[10] with films such as Awaara (1951) and Disco Dancer (1982) drawing more than 60 million viewers in the country.[19][18] The Hindi film actors Raj Kapoor[20] and Aamir Khan also became very popular in China, with films such as Awaara, 3 Idiots (2009), and Dangal (2016),[8][20] one of the top 20 highest-grossing films in China.[21]

The film industry of the Malay Archipelago (also known as Nusantara) consists primarily of film industries in Malaysia, Indonesia, the Philippines, and Singapore. Over the past century, these four cinemas have collaborated on a number of projects. A number of actors from this region have become some of the most sought-after movie stars in southeast Asia, commonly in Malay-speaking countries.

Share
Retrieved from "https://en.everybodywiki.com/index.php?title=Movie_star&oldid=706429"
Categories:
Hidden categories:
This page was last edited on 4 May 2020, at 06:18.
Content is available under License CC BY-SA 3.0 unless otherwise noted.
This page has been accessed 1,369 times.
Privacy policy
About EverybodyWiki Bios & Wiki
Disclaimers