From EverybodyWiki Bios & Wiki
Jump to:navigation, search
This article is about the current championship on the Raw brand. For the other WWE tag team championships, see WWE Tag Team Championship. 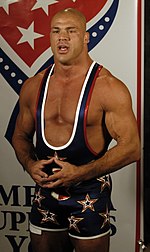 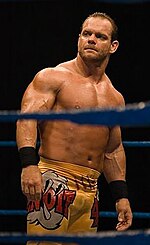 After the company's initial brand extension in the spring of 2002, the original World Tag Team Championship was reassigned that following summer to appear and be defended exclusively on the Raw brand, leaving the SmackDown brand without a tag team title. As a result, then-SmackDown General Manager Stephanie McMahon introduced the WWE Tag Team Championship and commissioned it to be the tag team title for the SmackDown brand on October 3, 2002. She stated that the inaugural champions would be determined from an eight-team tournament. On October 20, 2002, the team of Kurt Angle and Chris Benoit defeated Rey Mysterio and Edge at No Mercy in the tournament final to become the inaugural WWE Tag Team Champions.[2]

On October 17, 2007, SmackDown and ECW announced a talent sharing agreement that enabled talent from either brand's roster to compete on both brands. As a result, the title became eligible to be contended and defended on both brands. In late 2008 through early 2009, then-WWE Tag Team Champions The Colóns (Carlito and Primo) engaged in rivalry with then-World Tag Team Champions John Morrison and The Miz, which resulted in the announcement on the March 17 episode of ECW that at WrestleMania XXV, both teams would defend their titles against each other and the winning team would hold both titles.[3] The Colóns defeated Morrison and Miz, and thus unified the titles into what became known as the Unified WWE Tag Team Championship, the umbrella term for what officially remained two active championships that were now collectively defended.[4]

At WrestleMania 34 on April 8, 2018, then-Raw Tag Team Champions Cesaro and Sheamus were scheduled to defend the titles against Braun Strowman and a partner of his choosing. At the event, Strowman revealed that his partner would be a fan from the live audience. He then went out into the crowd and picked 10-year old Nicholas, and the two defeated Cesaro and Sheamus for the titles. This made Nicholas the youngest WWE champion in history. The following night on Raw, the two relinquished the titles.[6]

The inaugural champions were Kurt Angle and Chris Benoit. John Cena and The Miz's 9-minute reign is the shortest in the title's history, while The New Day (Big E, Kofi Kingston, and Xavier Woods) have the longest single reign at 483 days, and the longest combined reign at 532 days (WWE recognizes their combined reign as 533 days).

Dean Ambrose and Seth Rollins are the current champions in their second reign as a team. Individually, this is the second reign for Ambrose and fourth for Rollins. They won the titles by defeating Drew McIntyre and Dolph Ziggler on October 22, 2018 in Providence, Rhode Island during the live broadcast of Raw.

Retrieved from "https://en.everybodywiki.com/index.php?title=WWE_Raw_Tag_Team_Championship&oldid=201441"
Categories:
Hidden category:
This page was last edited on 27 October 2018, at 11:30.
This page has been accessed 1,949 times.
Content is available under License CC BY-SA 3.0 unless otherwise noted.
Privacy policy
About EverybodyWiki Bios & Wiki
Disclaimers