The WWE Universal Championship is a world heavyweight championship[lower-alpha 1] created and promoted by the American professional wrestling promotion WWE on the Raw brand.[9] It is one of two world titles for WWE's main roster, alongside the WWE Championship on the SmackDown brand. The championship is currently held by Brock Lesnar, who is in his record second reign.

Named in honor of the WWE Universe,[10] the championship was established on July 25, 2016 to be the world championship of the Raw brand. Its creation came as a result of the re-introduction of the brand split and subsequent draft on July 19, 2016 in which the WWE Championship, the promotion's original world title, became exclusive to SmackDown.[11] The inaugural Universal Champion was Finn Bálor. Since its inception, matches for the championship have headlined several pay-per-view events, including SummerSlam in 2017[12] and 2018,[13] and WrestleMania 34,[14] both being two of WWE's "big four" pay-per-views, the latter of which is WWE's flagship event. 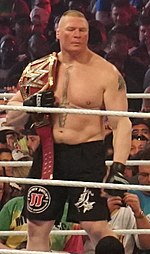 Current and two-time champion Brock Lesnar, the longest reigning Universal Champion; his 504-day first reign is the sixth longest world championship reign in WWE history and the longest since 1988[15]

With the reintroduction of the WWE brand extension,[16][17] a draft took place on the SmackDown Live premiere episode on July 19, 2016 and then-WWE Champion Dean Ambrose was drafted to the SmackDown brand.[11] At Battleground on July 24, Ambrose successfully defended the title in a triple threat match against Raw draftees Seth Rollins and Roman Reigns,[18] leaving Raw without a world title.[19] On the following episode of Raw, Raw Commissioner Stephanie McMahon and then-Raw General Manager Mick Foley created the WWE Universal Championship to serve as the brand's top championship.[10] According to Foley, the title was named in honor of the WWE Universe, the name WWE uses to refer to its fan base.[10]

The inaugural champion was crowned at SummerSlam in a singles match. Seth Rollins was automatically set for that match as he was Raw's number one draft pick and was not pinned in the WWE Championship match at Battleground. His opponent was determined by two fatal four-way matches on Raw, with the winners wrestling each other in a singles match.[10] Finn Bálor won the first fatal four-way by defeating Cesaro, Kevin Owens, and Rusev while Roman Reigns won the second by defeating Chris Jericho, Sami Zayn, and Sheamus.[10] Bálor then defeated Reigns and was added to the title match.[20] At SummerSlam on August 21, Bálor defeated Rollins to become the inaugural champion. Bálor was the first WWE wrestler to win a world title in his pay-per-view debut as well as winning his first world title in less than a month of his debut on WWE's main roster.[21]

The Universal Championship design was heavily criticized.[23] Jason Powell of Pro Wrestling Dot Net referred to it as "a title belt that no one likes".[24] Adam Silverstein of CBS Sports described it as "ugly"[25] while the live SummerSlam audience in Brooklyn, New York gave derisive chants, including "This belt sucks",[26] an assessment with which New England Sports Network reporters agreed.[27] That site's Ricky Doyle wrote that the crowd response turned what should have been a "landmark moment for the company" into an "awkward experience".[28] Mike Johnson of Pro Wrestling Insider felt the title looked like a "xerox" of the WWE Championship and did not blame the audience for reacting negatively.[29] The design was also unpopular with online wrestling fans.[26]

WWE employees responded in the aftermath of the title's debut. Seth Rollins chastised the SummerSlam crowd's reaction, writing on Twitter: "More important than a title's appearance is what it represents for the men fighting over it. You really let me down tonight, Brooklyn".[28] While acknowledging that he himself might have chosen a different belt design, Mick Foley echoed Rollins's response in a lengthy Facebook post. He recalled being presented with the WWF Hardcore Championship, a title belt made of broken metal pieces held together by duct tape, which challengers "made [...] mean something by busting [their] asses".[30] In a kayfabe promo on the following episode of Raw, the then-villainous Rollins called the championship belt "beautiful".[24]

Later in 2016, Jim Vorel of Paste ranked the title as the worst of nine then contested in WWE, noting its "obnoxious" design.[23] On the other hand, Nick Schwartz of Fox Sports wrote: "It's really not as bad as fans made it seem at SummerSlam. It's fine".[31]

As of June 20, 2021, there have been six reigns between five champions and two vacancies. Finn Bálor was the inaugural champion, but he was forced to vacate the title due to suffering a legitimate injury in winning the title, making his reign the shortest at 22 hours. Brock Lesnar holds three records with the championship: he has the most reigns at two, his first reign is the longest reign at 504 days (beginning on April 2, 2017 and ending on August 19, 2018), and he has the longest combined reign at 1465+ days. Kevin Owens is the youngest champion when he won it at 32 years old, while Goldberg is the oldest when he won it at 50.

Brock Lesnar is the current champion in his record-setting second reign. He defeated Braun Strowman to win vacant title at Crown Jewel on November 2, 2018 in Riyadh, Saudi Arabia. The championship had been vacated by Roman Reigns on October 22, 2018 after Reigns announced he was battling leukemia.

Retrieved from "https://en.everybodywiki.com/index.php?title=WWE_Universal_Championship&oldid=206715"
Categories:
Hidden categories:
This page was last edited on 4 November 2018, at 21:58.
This page has been accessed 1,607 times.
Content is available under License CC BY-SA 3.0 unless otherwise noted.
Privacy policy
About EverybodyWiki Bios & Wiki
Disclaimers