SmackDown is a brand of the U.S. based professional wrestling promotion WWE. The brand was first established on March 25, 2002 with a draft on Monday Night Raw and went into effect one week later on April 4. The brand would be discontinued for a period between August 2011 and July 2016.

Wrestlers assigned to the SmackDown brand wrestle predominantly on WWE's weekly Friday Night SmackDown television program on Fox, as well as branded and co-branded pay-per-view events and WWE Network events. The brand has also appeared in the Mixed Match Challenge and the interbrand Worlds Collide events. During the first brand split, they also competed on an exclusive supplementary show, Velocity, and on ECW, under a talent exchange program. 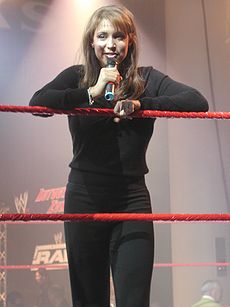 In its conception, according to Bruce Prichard in his Something to Wrestle podcast released in October 2018, the then World Wrestling Federation (WWF) originally planned to make SmackDown! an all-women's brand but ultimately decided against it because of the lack of talent.[2]

In March 2002, WWF underwent the "brand extension",[3] a process in which WWE divided itself into two branches with separate rosters, storylines and authority figures.[3] The two divisions, hosted by and named after Raw and SmackDown!, would compete against each other. The split resulted from WWE purchasing its two biggest competitors, World Championship Wrestling (WCW) and Extreme Championship Wrestling (ECW); and the subsequent doubling of its roster and championships. The brand extension was made public during a telecast of Raw on March 18, initiated with the first draft a week later on the March 25 episode of Raw and became official on the April 1 episode of Raw.

Wrestlers began to wrestle exclusively for their specific show. At the time, this excluded the WWE Undisputed Championship and WWE Women's Championship as those WWE titles would be defended on both shows.[3] In August 2002, then WWE Undisputed Champion, Brock Lesnar, refused to defend the title on Raw, in effect causing his title to become exclusive to SmackDown!.[3] The following week on Raw, Raw General Manager Eric Bischoff awarded a newly instated World Heavyweight Championship to Raw's designated number one contender Triple H. Accordingly, Lesnar's championship was no longer deemed "undisputed". Following this, the WWE Women's Championship soon became a Raw exclusive as well. As a result of the brand extension, an annual "draft lottery" was instituted to exchange members of each roster and generally refresh the lineups.

SmackDown! was the home brand for many top WWE stars including Batista, Eddie Guerrero, Big Show, John "Bradshaw" Layfield (JBL), Kurt Angle, Edge, The Undertaker, Rey Mysterio, John Cena, and Torrie Wilson. Guerrero would go on to become the WWE Champion as part of the show, thus becoming the main feature of SmackDown! throughout 2004 and the most popular wrestler of that year. The biggest star of the next decade, John Cena, started his WWE career on this brand and rose to stardom as "Doctor of Thuganomics" on the show, eventually winning his first WWE Championship during his tenure on the brand.

On June 6, then WWE Champion John Cena switched brands from SmackDown! to Raw as part of the month-long 2005 draft lottery. This effectively left SmackDown! without a world title. On the June 23 episode of SmackDown!, SmackDown! General Manager Theodore Long scheduled a six-man elimination match between Big Show, Booker T, Chris Benoit, Christian (replacing Big Show, who was picked by Raw in the lottery), John "Bradshaw" Layfield, Muhammad Hassan and The Undertaker to crown the first SmackDown! Champion. On the June 30 episode of SmackDown!, JBL won the match, but Long appeared afterward and stated that even though he had won the match SmackDown! did not need a championship anymore, instead revealing that JBL was the number one contender for the World Heavyweight Championship, at which point Batista, then World Heavyweight Champion, entered the ring as SmackDown!'s final draft lottery pick.

At the SmackDown! taping on January 10, 2006 that aired January 13, Batista had to forfeit the World Heavyweight Championship because of a legitimate triceps injury suffered at the hands of Mark Henry the previous week. Long decreed a battle royal for the vacant title, which was won by Kurt Angle, who was on the Raw brand, but switched to the SmackDown! brand for the duration of his reign as champion. On the April 7 episode of SmackDown! (which was taped on April 4), Long revived the King of the Ring tournament after a four-year hiatus as a SmackDown! exclusive tournament. The tournament ended at Judgment Day with Booker T as the winner, defeating Bobby Lashley in the final.

On October 16, 2007, the SmackDown! and ECW brands began a talent exchange, allowing their respective talent to appear and compete on either brand, as ECW was broadcast live from the same arena where SmackDown! was taped.[4][5]

On the August 29, 2011 episode of Raw, it was announced that performers from Raw and SmackDown were no longer exclusive to their respective brand.[9] Subsequently, championships previously exclusive to one show or the other were available for wrestlers from any show to compete for—this would mark the end of the brand extension as all programming and live events featured the full WWE roster.[10] In a 2013 interview with Advertising Age, Stephanie McMahon explained that WWE's decision to end the brand extension was due to wanting their content to flow across television and online platforms.[11]

On May 25, 2016, it was revealed that the brand split would return in July.[12] The 2016 WWE draft took place on the live premiere episode of SmackDown on July 19 to determine the rosters between both brands.[13] On the July 11 episode of Raw, Vince McMahon named Shane McMahon the commissioner of SmackDown.[14] Then next week on Raw, Daniel Bryan was revealed as the new SmackDown General Manager.[15] Due to Raw being a three-hour show and SmackDown being a two-hour show, Raw received three picks each round and SmackDown received two.[15] WWE Champion Dean Ambrose was SmackDown's first pick.[16]

On the November 7, 2017 episode of SmackDown, AJ Styles defeated Jinder Mahal for the WWE Championship.[17] On April 10, 2018, SmackDown Commissioner Shane McMahon announced that Daniel Bryan was back as a full-time WWE Superstar for the roster after his in-ring return at WrestleMania 34, therefore "graciously accepted Daniel's resignation as SmackDown General Manager". McMahon then named Paige, who had retired from in-ring competition due to injury the night before on Raw, as the new SmackDown General Manager.[18]

In September 2002, the Undisputed Championship became the WWE Championship again and was moved to SmackDown, prompting Raw General Manager Eric Bischoff to create the World Heavyweight Championship for Raw.[23] SmackDown created the WWE Tag Team Championship and they revived the United States Championship.[24][25] Over the course of the first brand extension, these championships switched between brands, usually due to the result of the annual draft. However, the Cruiserweight title was the only championship to never switch brands, staying on SmackDown from 2002 until the championship's retirement on September 28, 2007.

In October 2007, SmackDown and ECW began a talent exchange agreement, which meant that SmackDown talent could appear on ECW and vice versa. This allowed the United States Championship and WWE Tag Team Championship to be shared between the two brands.[26] In July 2008, the Divas Championship was created for SmackDown, allowing the SmackDown Divas to compete for a title.[27]

Share
Retrieved from "https://en.everybodywiki.com/index.php?title=SmackDown_(WWE_brand)&oldid=2114527"
Categories:
Hidden categories:
This page was last edited on 22 October 2021, at 01:32.
Content is available under License CC BY-SA 3.0 unless otherwise noted.
This page has been accessed 449 times.
Privacy policy
About EverybodyWiki Bios & Wiki
Disclaimers