From EverybodyWiki Bios & Wiki
Jump to:navigation, search
This article is about the current championship. For the historical championship, see WWE Cruiserweight Championship (1991–2007).

The WWE Cruiserweight Championship is a professional wrestling championship created and promoted by the American professional wrestling promotion WWE on its 205 Live brand. It is defended on the cruiserweight-exclusive 205 Live.[1] Unveiled on September 14, 2016, as the award for the Cruiserweight Classic, which was won by TJ Perkins, it is contested in WWE's cruiserweight division by wrestlers at a maximum weight of 205 lb (93 kg). The current champion is Cedric Alexander, who is in his first reign. 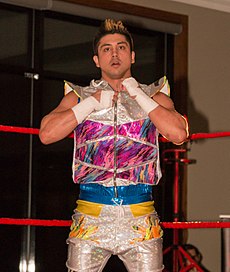 The Cruiserweight Classic was a WWE Network series and tournament for cruiserweights.[3] Tournament qualifying matches took place in various promotions of the independent circuit, including well known promotions such as Revolution Pro Wrestling, Progress Wrestling, and Evolve. Many cruiserweight wrestlers from around the world were given the chance to qualify for the 32-man tournament, which took place over four dates: June 23, July 13, August 26, and September 14, 2016.[4]

The final of the Cruiserweight Classic came down to TJ Perkins and Gran Metalik. Before the final match, Triple H revealed that the winner would not only receive a trophy, but would also become WWE Cruiserweight Champion for the new cruiserweight division on the Raw brand. Perkins defeated Metalik to become the inaugural champion.[5][6] Like the WWE Championship's side plates, the Cruiserweight title's side plates include removable round sections, allowing the holder's personal logo to be added to the championship belt; the default sections show silver and purple world maps with the WWE logo over them. During Neville's first reign, the color of the slash under the WWE logo on the center plate and default side plates were changed from purple to orange.[7].

Originally, the championship was defended exclusively on Monday Night Raw. On November 29, 2016, a cruiserweight-exclusive show on the WWE Network premiered called 205 Live.[8] On the premiere episode, Rich Swann defeated The Brian Kendrick for the championship. The championship then became defended on both Raw and 205 Live.[9]

After then-champion Enzo Amore was released from WWE on January 23, 2018, and the title was vacated,[10][11] it was announced that a general manager would be appointed for 205 Live and would address the championship.[12] On the January 30 episode of 205 Live, Drake Maverick (formerly known as Rockstar Spud in Impact Wrestling) was appointed as the 205 Live General Manager. Maverick announced that there would be a 16-man single elimination tournament to crown a new WWE Cruiserweight Champion, with the finals to occur on the WrestleMania 34 pre-show. The tournament came down to Cedric Alexander and Mustafa Ali where Alexander defeated Ali to win the vacant championship.

As of June 18, 2021, there have been ten reigns between eight champions and one vacancy. The inaugural champion was TJ Perkins. The oldest champion is The Brian Kendrick, winning the title at 37 years old, while the youngest champion is Rich Swann when he won it at 25. Neville and Enzo Amore have the most reigns at two. Neville also has the longest reign at 197 days, while Akira Tozawa has the shortest reign at six days. Neville also has the longest combined reign at 232 days (233 days as recognized by WWE).

The title is currently held by Cedric Alexander, who is in his first reign. He won the title by defeating Mustafa Ali in the finals of a 16-man tournament on the WrestleMania 34 pre-show.

Retrieved from "https://en.everybodywiki.com/index.php?title=WWE_Cruiserweight_Championship&oldid=62647"
Categories:
Hidden category:
This page was last edited on 23 August 2018, at 18:53.
This page has been accessed 1,655 times.
Content is available under License CC BY-SA 3.0 unless otherwise noted.
Privacy policy
About EverybodyWiki Bios & Wiki
Disclaimers