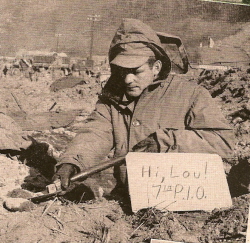 Colonel Welton Ralph Abell (May 17, 1922 – April 26, 1998) was a United States Marine Corps officer who served in the Korean War, as well as a former advertising executive. Abell was a recipient of the Navy's second-highest decoration — the Navy Cross — for combat valor in the Korean War.

Abell enlisted into the Marine Corps on October 23, 1942, and in July 1943 was sent to the University of Notre Dame as a V-12 student. He was commissioned a second lieutenant in March 1945. He saw action on the island of Saipan in World War II and in 1946 was awarded a degree in Journalism from the University of Missouri.[1] He was a Marine Corps reserve first lieutenant when called to active duty in 1950. Serving with the 2nd Battalion, 7th Marines (2/7) in Korea, he suffered a painful shoulder wound during a heavy enemy counterattack at the Battle of Chosin Reservoir but refused medical attention and regrouped his depleted company to fight off an attempted encirclement. He led his men up a steep hillside in a blinding snowstorm. He had assumed command of Fox/2/7 after its company commander, Captain William E. Barber was evacuated from the battlefield for his defense of the Toktong Pass. In January 1951 he became the assistant operations officer of 7th Marines and remained in the billet until being sent home in June 1951.[1]

For these heroic actions, he was awarded the Navy Cross.

For extraordinary heroism in action against the enemy while serving with a Marine Infantry Battalion in Korea, from 6-December 10, 1950. While serving as company commander of a marine rifle company Lieutenant Abell demonstrated outstanding qualities of personal leadership, bravery and resourcefulness under most unfavorable circumstances. On December 5, 1950, he was serving as a member of a regimental staff. During the afternoon he was given command of a rifle company which for five days had been isolated and suffered heavy casualties. This company which consisted of sixty-four men and one officer had just completed a day's march through enemy territory in sub zero weather. During the night the company was augmented by one hundred officers and men from special units of the division. This constituted Lieutenant Abell's command the following morning when his company moved out at first light as part of the advance guard battalion for the division's move from Hagaru-ri to Koto-ri. Throughout the following twenty-two hours of continuous action in sub zero weather in overcoming successive strong enemy positions which blocked the road, Lieutenant Abell placed himself at the head of his troops and with complete disregard for his personal safety moved under intense enemy fire to areas where the fighting was the heaviest in order to personally direct fire and movement of the men who were inexperienced in infantry tactics. Early in the day all but two of the officers were either killed or critically wounded, thus rendering control more difficult. In the afternoon an enemy movement threatened his flank. After two runners had been wounded in trying to reach one of his squads with a message to shift their fire, Lieutenant Abell personally moved through intense enemy fire in order to dispose his men and direct their fire in such a manner as to block the enemy threat. Throughout this move Lieutenant Abell led by example and by his display of calm courage and confidence where the fighting was heaviest he inspired his men and gave them faith in both his ability and theirs. On December 8, he continued to demonstrate outstanding leadership in the battalion's advance guard action from Koto-ri. Assigned the mission of seizing and defending a hill he skillfully maneuvered his depleted company and in the late afternoon was ordered to take up a defensive position. While inspecting his lines and encouraging his men he was painfully wounded. In spite of this he continued to exercise command and remained with his company until a strong counterattack had been repulsed. Only then did he return to the aid station for treatment. His fearless action and outstanding achievement contributed materially to the accomplishment of his battalions mission. Lieutenant Abell's display of outstanding courage and devotion to duty were in keeping with the highest traditions of the United States Naval Service.

After the war, he got his degree at Mizzou and went to work writing advertising copy for the Barry-Wehmiller Machinery Co. He moved to California in 1953 and worked in advertising. He retired in 1989.

Abell died on April 26, 1998, at age 75 of cancer at his home in San Clemente, California. As a Marine Corps Reserve colonel, he received a full-honors military burial at Arlington National Cemetery. He is buried in section 65, site 624.

Share
Retrieved from "https://en.everybodywiki.com/index.php?title=Welton_Ralph_Abell&oldid=1245971"
Categories:
Hidden categories:
This page was last edited on 15 January 2021, at 01:13.
Content is available under License CC BY-SA 3.0 unless otherwise noted.
This page has been accessed 476 times.
Privacy policy
About EverybodyWiki Bios & Wiki
Disclaimers