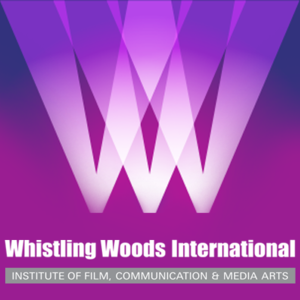 Whistling Woods International is a film, communication and media arts institute located in Mumbai, India. The institute is promoted by Indian Filmmaker Subhash Ghai, Mukta Arts Limited and Film City Mumbai. In July 2014, The Hollywood Reporter named Whistling Woods on its list of "The best film schools in the world". The school was first ranked among the top 10 film schools by The Hollywood Reporter in 2010. The Institute has affiliations with several film schools, including international student co-productions and credits transfer. Some of the affiliations are with Deakin University and Griffith University in Australia, Bradford College in the UK, Syracuse University in the United States and New York University Tisch School of the Arts, Asia.

Whistling Woods International was founded in the year 2006 by Filmmaker Subhash Ghai. Since then, the institute has diversified into Animation, Media & Entertainment, Communication and Fashion. To date, more than 1000 media and entertainment professionals have graduated from the school. Whistling Woods International has also been accepted as a full member of CILECT (Center International de Liaison des Ecoles de Cinema et de Television). The institute has established several academic partnerships with over 14 international universities, which gives its students opportunities to work on international co-productions.

The admission arguments for the Review Petitions of Mukta Arts and Whistling Woods International were heard in the High Court on 30 July 2014. The Court has admitted the petitions and issued an interim order, staying its order passed in February 2012, and allowing Whistling Woods to continue its operations in its campus in Film City, Mumbai. The final order will be passed after detailed arguments are heard when the review petitions come up for hearing. Both the state government of Maharashtra and the Film City Corporation had filed petitions in the Supreme Court of India in opposition to this High Court order. The Supreme Court heard them on 22 September 2014, dismissed the petitions and agreed with the arguments of Whistling Woods International and Mukta Arts. The academic operations of Whistling Woods International continue unhindered at this campus in Film City and the institute continues to accept students into its courses.

Both the above orders are available on the Bombay High Court & Supreme Court websites for review.

The Mumbai campus of 20 acres (81,000 m2) is located inside Mumbai’s film and television production centre, Dadasaheb Phalke Chitranagari (also known as Film City), and offers short-term and long-term degree and diploma programmes that vary in duration from 6 months to 30 months, both full-time and part-time. The Mumbai campus has been operational since July 2006 and has expanded to include an e-learning platform with online courses, broadcasting and VFX verticals, additional courses in Co-curricular Activities Program and the Short Courses Unit.

Whistling Woods International offers both short-term and long-term degree and diploma in various programs. The institute is organized into seven separate academic units

The 2 year MBA in Media & Entertainment and Post Graduate Program in Media & Communication is a dual certification programme. Its two components run concurrent to each other, with an MBA degree awarded by an affiliated university and the postgraduate programme certificate awarded by Whistling Woods International. It offers specializations in journalism, audiovisual communication, advertising, public relations and events.

The 3 year BBA in Management and Graduate Program in Media & Communication is a dual-certification programme that runs concurrently. The BBA degree is awarded from an affiliated university and the Graduate Programme certificate is awarded by Whistling Woods International.

The students of the Actors’ Studio undergo a project-based curriculum that has been designed to reflect real-world requirements. Student learning is done through several co-curricular faculties like Film Appreciation, International Art Literature Culture, Production Design & Music. Students of the school are enrolled in the 2 year Diploma in Acting, which teaches the art and craft of acting for cinema to aspiring actors. Anil Mange, Samvedna Suwalka, Nakul Sahdev, Vishal Malik and Akash Dhar some of the famous alumni of the Actors’ Studio.

The School of Filmmaking makes its students undergo study in several co-curricular faculties like Film Appreciation, International Art Literature Culture, Production Design & Music. This is done depending on the course each student enrolls themselves in. Students can choose to enrol themselves in the 3 year BSc in Filmmaking and Diploma in Filmmaking (with specialisations), two year Diploma in Filmmaking, one year Certificate Course in Screenwriting, 2 year MBA in Film & TV Producing or the 2 year MA in Screenwriting.

The School of Animation’s hybrid curriculum is designed to deliver theoretical and practical aspects relevant to the animation industry. The school offers a 3-year BSC in Digital Filmmaking & Graduate Program in Animation and four separate 21 week Certificate Courses in VFX. These four certificate courses can be taken in any order of their choosing in under 4 years in order to be awarded a Diploma in VFX by Whistling Woods International.

All Courses offered in the School of Vocational Education are short term part-time courses, delivered either thrice a week or on weekends. TISS SVE shall award the certification for all courses on successful completion.

Board of Directors and Advisory Boards[edit]

The Board of Directors of Whistling Woods International is made up Subhash Ghai, Meghna Ghai Puri, Pradeep Guha, Manmohan Shetty and Vijay Choraria.

The institute is equipped with a 250-seat digital cinema with Dolby Surround sound, a 4k digital projector with 3D projector and 33’ X 64’ Multi-purpose studio. It has acting and dance/yoga studios, a photographic darkroom, rehearsal halls, theatrical makeup and costume rooms, a library of films, texts and periodicals, and private film screening rooms. The institute and Sony have also created a Sony media technology centre, where Sony has installed HD and 3D content creation and digital cinema projection equipment and provides training in HD content creation from acquisition to post-production of content. It also teaches the pipeline of 3D filmmaking and methodology and provides training for 3D content creation.

Whistling Woods International organizes a number of workshops and events for their students, including Cinema 100, Inspiration, Future of Fashion Forum and Celebrate Cinema.

Murali Krishna, Kavan J. Ahalpara and Supreet Singh of Whistling Woods International were a part of the Oscar-winning movie Life of Pi while Aravinnd worked as the associate cinematographer with Santosh Sivan on films like Urumi (film) and Thuppakki and went on to do his first independent Tamil blockbuster movie Demonte Colony and Karan Butani worked as the Chief Assistant Director with Tigmanshu Dhulia on movies like Sahib Biwi Aur Gangster and Paan Singh Tomar.

Around 20 percent of Whistling Woods International's students are from countries like the USA, Canada, the UK, Nepal, Germany, Italy and France.

Retrieved from "https://en.everybodywiki.com/index.php?title=Whistling_Woods_International&oldid=462954"
Categories:
This page was last edited on 23 May 2019, at 23:10.
This page has been accessed 229 times.
Content is available under License CC BY-SA 3.0 unless otherwise noted.
Privacy policy
About EverybodyWiki Bios & Wiki
Disclaimers