William Charles Alfonso Marcel Spears credited professionally as Director Fonzy is an American filmmaker, commercial director, music video director, and producer. Born in Saint Louis Missouri, Fonzy began his career as a photographer and creative director. Due to his creative concept shoots he quickly became a well known local photographer in his hometown.[1] As a child he began to build an interest in movies and video work and eventually became a filmmaker. Fonzy began to expend his creative shoots by adding video and no longer soley doing photography. It was just a short amount of time that Fonzy decided to leave the photography realm and focus on his passion for videos.

In 2016 Fonzy launched his own media company, Luxstar Studios[2][3] which has now had multiple televised and published works. While working in the field, Fonzy met and began working with former NFL player Brandon Williams. Before long, he took over all branding campaigns for Williams and his astute work was even acknowledged in Williams's book Millionaire Mindset.[4] Working on this campaign had given Director Fonzy his first chance of working with influential talents and was his first breakthrough.

Later, Fonzy's video journey would lead him to to shoot music videos for some known names such as Sammie, Junior (J.R.), Murphy Lee, Jizzle Buckz, Lil Stl, Nikee Turbo of Rhythm + Flow plus more. One of Fonzy's most proud moments was landing the role as the director for a Save the Babies campaign geared towards stopping gun violence killing children and young adults.[5] Fonzy ended up becoming a notable figure in his home town of Saint Louis Missouri, his opinion can be seen amongst other well known figures such as Devon Alexander, Murphy Lee, Ginuwine, and Jason "Jay E" Epperson in the article "Nelly Vs Ludacris Live on Instagram".[6][7] After his popularity increased Director Fonzy would often find other business owners wanting to host his creative projects and has even been picked up by news outlet. St. Louis Post-Dispatch news StlToday.[8] 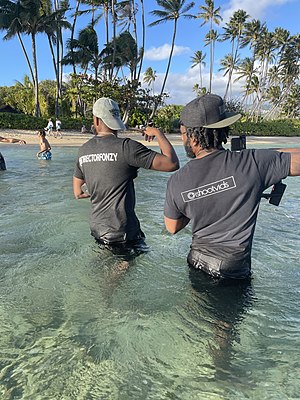 Aside from film work Fonzy is a casting director and owns a Talent casting agency named Crave Casting.[9] Fonzy has casted talent and shot advertisement for some top brands such as Savage X Fenty, ColourPop Cosmetics, and Pretty Little Thing.

Share
Retrieved from "https://en.everybodywiki.com/index.php?title=William_Charles_Alfonso_Marcel_Spears&oldid=2236719"
Categories:
Hidden categories:
This page was last edited on 3 January 2022, at 00:30.
Content is available under License CC BY-SA 3.0 unless otherwise noted.
This page has been accessed 103 times.
Privacy policy
About EverybodyWiki Bios & Wiki
Disclaimers