Bloodlust Zombies marked her entry into mainstream cinema — with the starring role in the comedy horror film in 2011.[15][16][17]

Texas spent her early life in Castroville, Texas.[19][20] Her ancestry is from Puerto Rico, Norway, and Germany.[21][22] She played basketball in high school in Texas.[21] She attended Texas State University studying respiratory care therapy,[23] and received an associate's degree.[21] She worked at a restaurant as a bartender and assistant manager in San Marcos, Texas.[21] While working at the restaurant, she was discovered by Jack Venice of Shane's World.[2] Venice offered her a job in the adult industry.[2] Texas began working in adult films at age 21.[21] 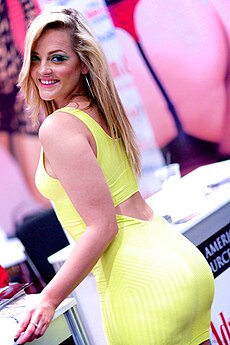 International Business Times placed Texas among "the most popular names in the adult industry" in 2014.[24]

Texas's first scene was with Jack Venice in Shane's World's College Amateur Tour in Texas, filmed in October 2006.[2] This was followed by several scenes for Bang Bros in Florida.[3] She moved to Los Angeles and began shooting scenes for the LA Direct modeling agency in March 2007.[2] Released in February 2008, Discovering Alexis Texas was directed by the adult performer Belladonna.[25] Later that year, she won the NightMoves Award for Best New Starlet.[11] Texas was featured on the cover of Genesis magazine in April 2009,[26] and Hustler magazine's 35th anniversary edition in June 2009.[27] The same year, Texas launched her official website and formed her own company Alexis Texas Entertainment, as a subsidiary of Starlet Entertainment Group.[1] Her website would go on to win an XBIZ Award for Performer Site of the Year.[9] In 2010, she was named by Maxim as one of the 12 top female stars in porn.[28] She was credited the same year with an acting role in the film Bikini Frankenstein.[6]

In 2011, Texas starred in the comedy horror film Bloodlust Zombies.[15][16][17] Credited with the lead role in the film, it was her first performance in mainstream cinema.[4][5] She also appeared in the music video for "Bandz a Make Her Dance" by Juicy J in 2012.[29][30] By 2012, Texas had appeared in over 400 films in the adult industry.[3] That year, Texas signed an exclusive, one-year contract with the company Adam & Eve.[31][32] Texas was featured as the cover model for The Big Butt Book.[33][21] In 2013, she was one of the 16 actresses portrayed in Deborah Anderson's documentary film Aroused.[34] She subsequently appeared in the 2013 romantic comedy film Don Jon written and directed by Joseph Gordon-Levitt.[35][36] In 2014 International Business Times placed her among "the most popular names in the adult industry".[24] 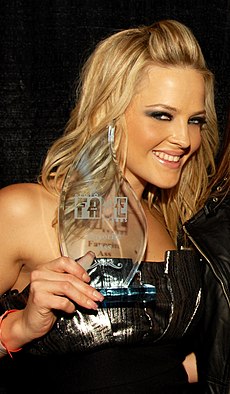 Vivid Radio featured a show entitled Alexis Texas: Sex ED in 2015.[37] In June 2015, Elegant Angel signed her to an exclusive directing contract.[38][39] Her directorial debut, Big Booty Tryouts, was released the following month.[40] She appeared in all of the film's scenes, which were the first ones she shot after a nearly two-year hiatus from performing.[40] Texas directed a cast in the film that included Anikka Albrite, Abella Danger, AJ Applegate, Keisha Grey and Dani Daniels.[41] She also directed The Real Buttwoman Returns, which featured her first gangbang scene.[42][43] Texas was selected as co-host of the 2015 AVN Awards.[14][33] She subsequently signed an exclusive acting deal with Elegant Angel in 2016.[39]

Other articles of the topic Erotica and pornography : Keisha, Tsubaki Sannomiya, Will Clark, Casey Calvert, Arpad Miklos, Jessica Jaymes, Sindee Jennings
Some use of "" in your query was not closed by a matching "".

Share
Retrieved from "https://en.everybodywiki.com/index.php?title=Alexis_Texas&oldid=2930886"
Categories:
Hidden categories:
This page was last edited on 6 October 2022, at 14:41.
Content is available under License CC BY-SA 3.0 unless otherwise noted.
This page has been accessed 3,455 times.
Privacy policy
About EverybodyWiki Bios & Wiki
Disclaimers