From EverybodyWiki Bios & Wiki
Jump to:navigation, search
This article is about the singer. For his eponymous album, see Brian McKnight (album).

Brian Kelly McKnight (born June 5, 1969) is an American singer-songwriter, actor, arranger, record producer, and multi-instrumentalist.[1][2] McKnight is most recognized for his strong falsetto and belting range. McKnight's work has earned him 16 Grammy Awards nominations, albeit never been awarded one.[3] He is third only to Morten Lindberg and Snoop Dogg for the record of most Grammy nominations without a win.[4]

McKnight was born in Buffalo, New York to Claude McKnight, Jr. and Ruth Elaine Willis. His musical career began in childhood when he became a member of his church choir.

In 1990, McKnight's older brother, Claude McKnight III, and his band, Take 6, signed a record deal with Warner Brothers. This encouraged McKnight to shop his own demo tapes and by the age of 19, he signed his first recording deal with Mercury Records subsidiary, Wing Records.[5] In 1992, Brian McKnight was released, and his self-titled debut album peaked at fifty-eight in the Billboard 200 chart, which primarily featured the ballad (and top twenty single) "One Last Cry". It was followed by two more albums for Mercury, 1995's I Remember You and 1997's Anytime. Anytime, McKnight's final album with Mercury, sold over two million copies and was nominated for a Grammy. The video for "Anytime", directed by Darren Grant, was nominated for Best Male Video at the 1998 MTV Video Music Awards. In 1997, McKnight recorded "Remember the Magic" for Disney World's 25th anniversary.

McKnight signed with Motown in 1998 and released the Christmas album Bethlehem, the first of five albums he released on Motown. In 1999, McKnight released Back at One, his most successful album to date, which eventually went on to sell over three million copies. Also "Back at One" is one of four of McKnight's studio albums to reach the Top 10 on the Billboard 200 albums chart, reaching number 7 on October 9, 1999.[6]

In late 2005, McKnight signed with Warner Bros. Records, and released the album, Ten. released December 2006, his only studio album with the label. Three singles released from the album: "Find Myself in You" (which originally appeared on the soundtrack to the 2006 Tyler Perry movie Madea's Family Reunion,) "Used to Be My Girl", and "What's My Name".

In October 2007, McKnight made his Broadway debut in the show Chicago.

From 2006 to 2010 he hosted a radio show, The Brian McKnight Morning Show with Pat Prescott on KTWV The Wave in Los Angeles, CA. The show was briefly simulcast on KHJZ-FM, Smooth Jazz 95.7 The Wave in Houston, TX from 6AM-9AM CST.

In 2009, he appeared in the second season of Celebrity Apprentice.[7] Each celebrity played to raise money for the charity of his or her choice; McKnight elected to play for Youthville USA.

From September 2009 to May 2010, McKnight served as the media personality and hosted[8] The Brian McKnight Show, a late night talk show billed as a combination of talk and variety, aired in syndication.

On March 31, 2011, McKnight sang the National Anthem for MLB Opening Day in Cincinnati, Ohio with his sons Brian, Jr. and Niko. He had previously sung the National Anthem for the 1997 NBA All-Star Game in Cleveland, Ohio, Game 6 of the 2002 World Series in Anaheim, California, near his Los Angeles home, and the 2005 Major League Baseball All-Star Game in Detroit. McKnight has also made numerous other "National Anthem" appearances throughout his career. On October 22, 2012, McKnight sang "God Bless America" in the 7th inning of Game 7 of the National League Champion Series in San Francisco, California. 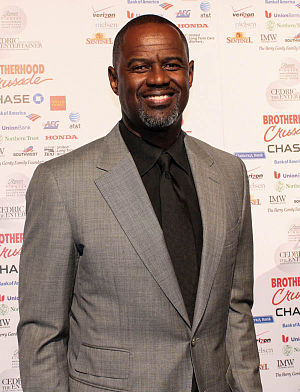 McKnight at the 2014 Pioneer of African American Achievement Awards Gala

On April 23, 2012 McKnight posted to YouTube "If You're Ready To Learn", which has been characterized by Billboard as a "filthy jam." Billboard selected this lyric from the work to quote: "Let me show you how your p—y works/Since you didn't bring it to me first." [9] Other media outlets such as MTV, the Toronto Sun, and NewMediaRockstars[10] have also written about McKnight's recent, more adult-oriented efforts.[11][12] Shortly after the single's release, McKnight and known humor website "Funny or Die" revealed that the single was a collaboration between the two parties. McKnight would later explain that he wrote the parody as a commentary on the state of R&B, which he noted was in a period of degradation overall with famous radio station 98.7 Kiss FM shuttering and hit singles being inferior quality music, among other ailments.[13]

On August 14, 2015, McKnight released the single "Uh Oh Feeling", the first track from his album Better, which was released on his own label Brian McKnight Music LLC via Kobalt Label Services.[14] Better was released on February 26, 2016, followed by positive reviews.[15]

On September 23, 2016, McKnight released his first live CD, DVD, and Blu-ray collection entitled An Evening With in partnership with independent recording label The SoNo Recording Group through the Universal Music Group. The concert was recorded in Los Angeles at the historic Saban Theatre. The release includes fourteen songs performed live with his full band plus three newly written and recorded songs. The first single "Everything" reached the top twenty on the national Adult Contemporary charts in September 2016. The CD version of the concert debuted on the Billboard R&B chart at number thirteen as a Hot Shot Debut. Also included is a duet with Gino Vannelli on the song "Brothers in the End". The Blu-ray and DVD version of the release premiered on the Billboard Music DVD chart at number nine.

In May 2018, he announced work on his next studio album tentatively titled Bedtime Story which would be 60 minutes of music "for the bedroom aka baby-making music."[17]

Brian McKnight's x-rated song upset a portion of his religious fan base, resulting in the removal of the video from YouTube. He got the idea for the x-rated song during a Twitter session with his fans. A vocal minority questioned him for releasing the song, primarily due to his being raised in the Seventh-day Adventist Church. One Twitter one fan asked McKight; "Are or we're [sic] you really a 7th Day Adventist?" "I grew up that way," replied McKnight. "And now your [sic] not?" "Religion was man made," answered McKnight.[18]

McKnight was married in 1990 to singer/songwriter and his college sweetheart, Julie McKnight. Brian and Julie have 4 children. They divorced in 2003.

Brian McKnight was raised a Seventh-day Adventist. Religion was important in the McKnight family, with many generations being Seventh-day Adventists. His grandfather was a pastor of a church, and his mother played the piano and sang in a gospel choir in Buffalo's Emanuel Temple. Being the youngest of four boys, McKnight became a member of an a capella gospel quartet with his brothers. He also attended Oakwood College, a Seventh-day Adventist university in Huntsville, Alabama, from 1987–1989. In his sophomore year, McKnight got into trouble for violating Oakwood's rules about dormitory visitors, for having his girlfriend in his dorm room. They were both expelled.[21][22]

Retrieved from "https://en.everybodywiki.com/index.php?title=Brian_Mcknight&oldid=571345"
Categories:
Hidden categories:
This page was last edited on 19 November 2019, at 21:55.
This page has been accessed 515 times.
Content is available under License CC BY-SA 3.0 unless otherwise noted.
Privacy policy
About EverybodyWiki Bios & Wiki
Disclaimers