This article lists the burial places of founders of religious traditions. If there is no burial place, the place of death is mentioned. 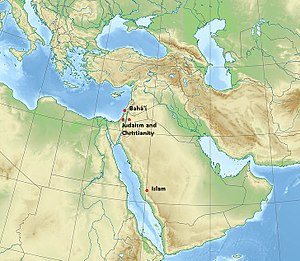 Map of burial places of founders of Abrahamic religions.

The Shrine of the Báb, the burial location of the Báb, the founder of Bábism and one of three central figures of the Bahá'í Faith, is located on Mount Carmel, in Haifa, Israel.

Located in Bahji near Acre, Israel, the Shrine of Bahá'u'lláh is the most holy place for Bahá'ís and their Qiblih, or direction of prayer. It contains the remains of Bahá'u'lláh, founder of the Bahá'í Faith and is near the spot where he died in the Mansion of Bahji.

The Buddha's body was cremated in Kushinagar, India and the relics were placed in monuments or stupas, some of which are believed to have survived until the present. Ramabhar Stupa in Kushinagar was built over a portion of the Buddha's ashes on the spot where he was cremated by the ancient Malla people. The Temple of the Tooth or Dalada Maligawa in Sri Lanka is the place where the right tooth relic of Buddha is kept at present.

According to early Christian sources the Church of the Holy Sepulchre occupies the location where Jesus is said to have been entombed between his crucifixion and resurrection. It is located in the Christian Quarter of the Old City of Jerusalem.

A second site, known as the Garden Tomb, located just outside Jerusalem's Old City has become a popular Protestant alternative to the Church of the Holy Sepulchre, which is dominated by the Catholic and Orthodox faiths.

Mary Baker Eddy is buried at Mount Auburn Cemetery in Cambridge, Massachusetts in the United States.

According to early Muslim sources, Muhammad is buried in the Al-Masjid an-Nabawi ("Mosque of the Prophet") in the city of Medina in Saudi Arabia. The tomb of Muhammad lies within the confines of what used to be his wife Aisha's and his house. During his lifetime it adjoined the mosque, which was expanded during the reign of Caliph al-Walid I to include his tomb.[1]

Mirza Ghulam Ahmad, founder of the Ahmadiyya Muslim Community, is buried at his birthplace of Qadian, Punjab, India.

The exact location of the grave of Moses is unknown, but according to Deuteronomy 34:6 it is on or near Mount Nebo just east of the Jordan river, now in the kingdom of Jordan.

The Cave of the Patriarchs is located in the ancient city of Hebron (which lies in the southwest part of the West Bank, in the heart of ancient Judea), and is generally considered by Jews, Christians, and Muslims to be its spiritual center. Jewish, Christian, and Islamic tradition holds that the compound encloses the burial place of four Biblical couples: Adam and Eve; Abraham and Sarah; Isaac and Rebekah; Jacob and Leah. According to Midrashic sources, it also contains the head of Esau, the brother of Jacob.

Joseph Smith is buried at the Smith Family Cemetery in Nauvoo, Illinois in the United States.

Upon his death, L. Ron Hubbard was cremated and his ashes were scattered in the Pacific Ocean.[2]

Gurdwara Kartarpur (meaning "The Abode of God") was established by Guru Nanak, the founder of Sikhism in 1522. When Guru Nanak died in 1539, Hindus and Muslims disagreed on how to perform his last rites. A samadhi (according to Hindu tradition) lies in the Gurudwara and a grave (according to Muslim traditions) lies on the premises as a reminder of this discord.[3] The gurudwara is located in a small village named Kartarpur on the West bank of the Ravi River in Punjab, Pakistan.

When it became clear that the death of Guru Nanak Dev was near, a dispute arose among his followers. His Hindu followers wanted to cremate the remains while his Muslim followers wanted to bury the body following Islamic tradition. Nanak brokered a compromise by suggesting that each group should place a garland of flowers beside his body, and those whose garland remained unwilted after three days could dispose of his body according to their tradition. However, the next morning, upon raising the cloth under which the Guru’s body lay, only the flowers shared between his followers were found. The Hindus cremated their flowers whereas the Muslims buried theirs. The Guru had departed.[4]

The Gurudwara at Kartarpur can be seen from another Gurudwara located across the border at the historical town of Dera Baba Nanak in India, another important preaching centre of the Guru. Both sites are one of the most significant places in Sikhism located along Indo-Pak border. Recently, there has been lobbying to open a corridor for Sikhs from India to visit the shrine without any hindrance or visa. It lies only 2 km from the international border.

Taoism was founded by Laozi, the author of the Tao Te Ching. According to Taoist legend, Laozi transmitted the Tao Te Ching at the request of a border guard before departing from China (i.e. from known civilization). He is believed to have lived out the rest of his days in communion with Nature, and some Taoist traditions hold that he achieved immortality. Whether he underwent death or not is not made clear by all parts of the tradition, and if he did, it was in some remote area, far from civilization at that time.

Tenrikyo considers the Foundress's Sanctuary in Tenri, Nara, Japan to be the site where their faith's founder "lives and works";[5] she died in 1887.

The Unification Church was founded by Sun Myung Moon in 1954. In 2012, he was buried at his house in Cheongseongsan, in South Korea's Gyeonggi Province.[6]

Zoroastrianism was founded by Zoroaster. There is no consensus as to where Zoroaster lived, much less where he died or what became of his remains. Most believe that he died in Balkh while he was praying. When he died, his entire body became a flame, as fire in Zoroastrianism is very important.

Retrieved from "https://en.everybodywiki.com/index.php?title=Burial_places_of_founders_of_world_religions&oldid=869669"
Categories:
Hidden categories:
This page was last edited on 19 July 2020, at 10:40.
This page has been accessed 1,156 times.
Content is available under License CC BY-SA 3.0 unless otherwise noted.
Privacy policy
About EverybodyWiki Bios & Wiki
Disclaimers