ChaiChalk is a Pakistani company which operates in the literary industry. It raised PKR 2.3 million during relief efforts for those affected by the 2015 Hindu Kush earthquake and operates mainly though its online network and events. 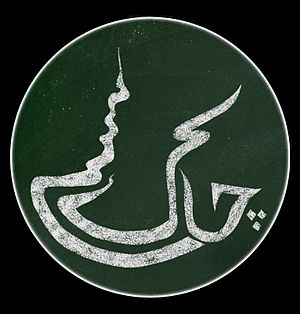 ChaiChalk is a digital internet media company, based in Lahore, Pakistan.[1] The company aims to provide an online experience which harnesses Pakistani talent to tell stories, to highlight social issues, and to adopt international media practices in the Pakistani context. The company operates as a social enterprise and is incubated at Lahore University of Management Sciences. While the mission of the company is to revive the literary heritage of Pakistan and provide publication opportunities for Pakistani writers, there is some emphasis on social impact.

The company employs sixty people, most of whom are full-time. These employees come from various institutions around Pakistan, as well as from Pakistani diaspora globally. The official website hosts a collection of fiction and non-fiction, which is classified into multiple categories. With the increasing national focus on the official Pakistani language, Urdu, ChaiChalk is among the many movements to return the language to relevance. 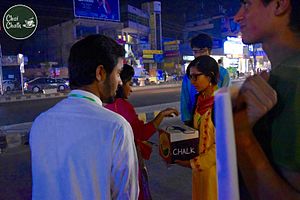 A photo of ChaiChalk members raising funds for those displaced by the earthquake in 2015.

ChaiChalk was founded in August 2015 by Asad Shabbir, and Kiran Masood. The initiative stems from a lack of publication opportunities in the country which has forced many writers to pursue publishers abroad.

Apart from attempting to build a network of writers, the company has been involved with a series of social outreach activities such as helping raise funds (2.3 million PKR) for those affected by the 2015 Pakistan-Afghanistan earthquake.[2] ChaiChalk also arranged a vigil in light of a suicide attack in Jacobobad, Pakistan which killed 40 people during a religious procession. 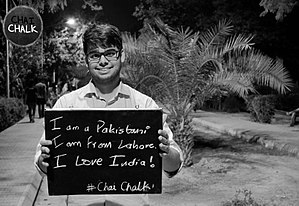 A photo from a participator in the #ProfileForPeace campaign.

In October, an Indian movement, led by Ram Subramaniam, called #ProfileForPeace sent messages of peace to neighboring country, Pakistan. Amidst shaky relations, these messages were aimed at the average Pakistani and aimed to bridge the gap between the two countries. ChaiChalk responded to this movement from the Pakistani side and highlighted the shared literary heritage between Pakistan and India.[3][4]

Retrieved from "https://en.everybodywiki.com/index.php?title=ChaiChalk&oldid=872759"
Categories:
Hidden categories:
This page was last edited on 20 July 2020, at 03:22.
This page has been accessed 531 times.
Content is available under License CC BY-SA 3.0 unless otherwise noted.
Privacy policy
About EverybodyWiki Bios & Wiki
Disclaimers