Danial Hajibarat started photography professionally since his adolescence.[1] In 2003, he began made with short films and video clips and in the following years, He participated in the theaters of Ases and Fajr Festival.

Danial Hajibarat is also one of the champions of the Iranian car racing.[2] 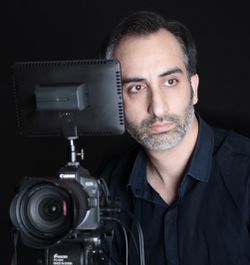 Danial Hajibarat behind the scenes of The Madness 2020

You have to Sign in or create an account to comment this article !<comment-streams/>
Retrieved from "https://en.everybodywiki.com/index.php?title=Danial_Hajibarat&oldid=981637"
Categories:
Hidden categories:
This page was last edited on 22 August 2020, at 17:29.
This page has been accessed 701 times.
Content is available under License CC BY-SA 3.0 unless otherwise noted.
Privacy policy
About EverybodyWiki Bios & Wiki
Disclaimers
Mobile view