Rezaeinejad was killed by motorcycle borne gunmen in July 2011 outside the front gate of the family home, while he was driving home with his wife (Shohreh Pirani) after picking up their daughter, Armita, from kindergarten.[1] His wife was also wounded in the attack.[2][3]

Initial reports, including from the semi-official ISNA agency, identified the victim as Darioush Rezaei, a 46-year-old physicist whose area of expertise is neutron transport and is known to be involved in Iran's nuclear program.[4][5]

However, news agencies later confirmed the victim was not the nuclear physicist, but Darioush Rezaeinejad, a postgraduate electrical engineering student at Tehran's K.N.Toosi University of Technology, who was waiting to defend his thesis.[6][7] and working at a national security research facility.[1]

When news of the assassination broke, the speaker of Iran's parliament Ali Larijani suggested the United States and Israel had killed Rezaeinejad. A U.S. State Department spokeswoman Victoria Nuland stated, "We were not involved. Our sympathies are obviously with the family of the victim."[8] Rezaeinejad is the fourth scientist "allegedly associated" with Iran's nuclear program to have been killed by bomb, gunshot or poisoning since 2007.[9]

Supposal of relation to the nuclear program[edit] 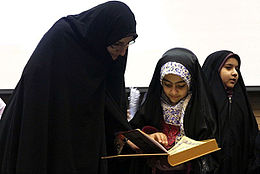 The wife and child of Darioush Rezaeinejad

Iranian semi-official press first related Rezaeinejad's assassination to the nuclear program of Iran but Iran's intelligence minister, Heydar Moslehi, and other officials denied any links between Rezaeinejad and the nuclear program. Later when Ali Larijani, blamed the US and Israel, Moslehi said it was too early to tell.[10]

Analyst Afshon Ostovar writes, "I suspect, just based on what's known in the Iranian media reporting, that Rezaeinejad was assassinated because of his relationship to Iran's nuclear programme".[10]

According to Iran's Fars news, assassins might have confused Darioush Rezaeinejad with Dariush Rezaei Ochbelagh, specialist in nuclear reactors and an assistant professor at Amirkabir University.[11]

On the other hand, Rezaeinejad and co-author Mojtaba Dadashnejad had been doing research on high-voltage switches, that are used both in detonators for nuclear weapons and missiles and in many nonmilitary applications.[11][12]

Share
Retrieved from "https://en.everybodywiki.com/index.php?title=Darioush_Rezaeinejad&oldid=879721"
Categories:
Hidden categories:
This page was last edited on 21 July 2020, at 18:44.
Content is available under License CC BY-SA 3.0 unless otherwise noted.
This page has been accessed 1,609 times.
Privacy policy
About EverybodyWiki Bios & Wiki
Disclaimers