Eve Angel (born May 19, 1983), is a Hungarian actress, model, and former pornographic actress. Her first interracial film was filmed in 2002 at the age of 18, titled Eighteen 'N Interracial 4. In 2009, she won the AVN Award for female foreign performer of the year.

Born and raised in Budapest, Hungary, Angel is the middle child in her family, she has a younger sister and an older brother, with whom she manages a design company. Eve Angel started out as a very average girl; however, as soon as she graduated at the age of 18, she made her foray into the adult business. It just so happens that she was friends with a girl who was already in the adult modeling industry, who helped her get her foot in the career.

Starting out by appearing mostly boy/girl shoots and scenes, her focus changed around 2003 and since then Eve exclusively performs in lesbian scenes. She has stated that at first she only loved the money and travel that industry afforded her, but eventually grew to love the fun of the work and the opportunity to have sex with beautiful women. 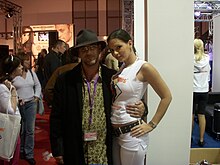 During her career, Angel has been photographed and filmed by Andrew Youngman, John Walton, Denys Defrancesco, and Viv Thomas; frequently appearing in scenes with stars like Mya Diamond, Dorina, Zsanett Égerházi, Sophie Moone, and Aneta Šmrhová. One of her most memorable performances was with Monica Sweet in GirlFriends Films I Dream of Jo 3; and her notable print and modeling work includes features in Playboy, Penthouse, Mayfair, Club International, Swank, and Velvet.

In 2009, Angel won the AVN Award for Female Foreign Performer of the Year.[1]

In an interview with Pierre Woodman in 2012, she stated that off-camera her preference is for heterosexual sex.[2] In November 2015, Pierre Woodman revealed that she was pregnant.[3]

List of boy/girl films. Titles in grey are compilations.

This article "Eve Angel" is from Wikipedia. The list of its authors can be seen in its historical and/or the page Edithistory:Eve Angel. Articles copied from Draft Namespace on Wikipedia could be seen on the Draft Namespace of Wikipedia and not main one.

Retrieved from "https://en.everybodywiki.com/index.php?title=Eve_Angel&oldid=888922"
Categories:
Hidden categories:
This page was last edited on 24 July 2020, at 04:10.
This page has been accessed 1,181 times.
Content is available under License CC BY-SA 3.0 unless otherwise noted.
Privacy policy
About EverybodyWiki Bios & Wiki
Disclaimers