Geeta Bali (1930 ‒ 21 January 1965) born Harkirtan Kaur, was an Indian film actress who appeared in Hindi language films. She was considered one of the most spontaneous and expressive stars of Bollywood for her acting.[2]

Geeta Bali was born in the pre-partition Punjab in the city of Sargodha in British India as Harkirtan Kaur in 1930.[1] Her family moved to Mumbai when she started to get breaks in films. 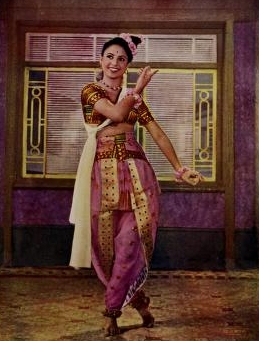 Geeta Baali started her film career as a child actress, at the age of 12, with the film The Cobbler. She made her debut as a heroine in Badnaami (1946).[3]

Bali became a star in the 1950s. She had also worked earlier with her future brother-in-law Raj Kapoor in Bawre Nain (1950) and with her future father-in-law Prithviraj Kapoor in Anand Math. Unlike other actresses who gave up films after marrying into the Kapoor family, Bali kept acting until her death. Her last film was Jab Se Tumhe Dekha Hai in 1963. She did more than 70 films in a 10 year career.[2]

Her family lived in Amritsar before 1947. Her father, Kartar Singh was known as a philosopher. He was a Sikh scholar and kirtan (Sikh devotional music) singer. Her maternal grandfather, Takhat Singh (1870-1937), was the founder of Sikh Kanya Mahavidyalay - a boarding school for girls and the first of its kind established in 1904 in Ferozepur. Her elder brother DigVijay Singh Bali was a film director. He directed the movie Raag Rang starring her and Ashok Kumar in 1952.The parents encouraged their daughters, Harkirtan (Geeta Bali) and Hardarshan, to learn classical music and dance, horse riding and gatka fencing.

On 23 August 1955, Geeta married Shammi Kapoor, with whom she was working in the film Coffee House.[6] They had two children, a son (Aditya Raj Kapoor) and a daughter (Kanchan).[2]

She died on 21 January 1965, having contracted smallpox while shooting a Punjabi film, Rano, based on a novel Eik Chadar Maili Si by Rajinder Singh Bedi. He was directing the film and she was the producer. Bedi, devastated by the untimely death of Bali, abandoned the project. He wrote later that he had put the novel, Ek Chadar Maili Si, on her burning funeral pyre.[citation needed]

Share
Retrieved from "https://en.everybodywiki.com/index.php?title=Geeta_Bali&oldid=820037"
Categories:
Hidden categories:
This page was last edited on 19 June 2020, at 16:26.
Content is available under License CC BY-SA 3.0 unless otherwise noted.
This page has been accessed 748 times.
Privacy policy
About EverybodyWiki Bios & Wiki
Disclaimers