Grant Macdonald (Silversmiths) Limited is a luxury goods designer, manufacturer and retailer specialising in silver and gold objets d’art, silverware, tableware and gifts. The company currently holds a Royal Warrant by appointment to HRH the Prince of Wales as Goldsmiths and Silversmiths.[1] 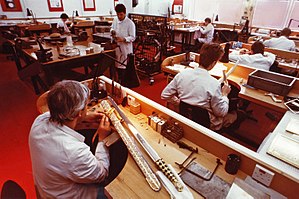 Founded in 1969 by Grant Macdonald, Grant Macdonald began as a bespoke silversmith workshop producing commission only silver and gold objets d’art. Originally based in the top floor of Albioncraft’s jewellery workshop in Benjamin Street, London, the company moved in 1977 taking over the extensive workshop of renowned silversmith Gerald Benney in Bear Lane, Southwark, London which has remained the company's workshop and head office to this day.[2]

In the early 1980’s Grant Macdonald became established as key silversmith in the Middle Eastern market, creating handmade decorative swords and gifts for Palaces, as well as large scale commissions. During this time the workshop grew and many new commissions followed from trophies and jewellery through to collections of domestic silver.[3] The company also began designing and making for large luxury retailers such as Asprey and Alfred Dunhill Ltd.. 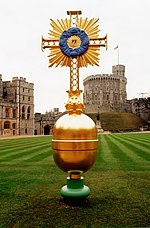 The finished Dresden Orb and Cross at Windsor Castle

In the 1990’s the company focused more on manufacturing whilst taking on some large commission projects including remaking the Orb and Cross for the Dresden Frauenkirche in 1998 which was finally installed in 2004.[4][5] This piece was required to be made using the same materials and making process as the 18th century original which was destroyed by allied bombings during World War II.[6] This commission was a gift from the British people to the people of Dresden as an act of reconciliation.[7] Master silversmith Alan Smith took on the work of recreating the seven meter structure and this was very fitting as his father had been one of the Royal Air Force pilots during the raids.[8][9]

In 2003 Grant Macdonald was one of the first to use 3D printing within the trade and invested heavily in the technology to help speed up manufacturing times but also to create the almost impossible. At this time the company started to create it’s now signature hollow cutlery in Sterling silver.[10][11]

Grant Macdonald has continued to remain a company director since its creation. Grant’s son George Macdonald became a director in 2005. 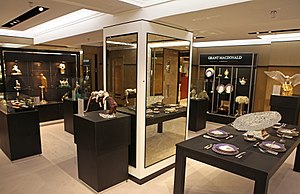 The Grant Macdonald store in Harrods

In 2011, the company was appointed as a luxury partner to Aston Martin,[12] creating a collection of car models, silver tableware, chinaware and crystal ware as well as various other limited edition sterling silver gift items.[13] This led to the opening of Grant Macdonald’s first standalone flagship store in London’s Harrods, which has led to its current role as a retail brand alongside manufacturing[14]

In 2016 the company was awarded a Royal Warrant from HRH The Prince of Wales as Goldsmiths and Silversmiths.[8]