Human Act Foundation (HAF), is a world-wide development organization, privately founded by Djaffar Shalchi and Ané Maro. Human Act are determined to prove that extreme poverty is not a natural state to accept, and that the goods of the world can be differently distributed. After being launched in 2016, an orphanage in Iran and school projects in Nepal and Uganda immediately began. In late 2016, the team launched the global initiative Move Humanity, aiming to mobilize each year at least 1 percent of the wealth of the worlds's billionaires, in order to end extreme poverty either through philantropy or taxes. In september 2017 Human Act entered a partnership with the UN-SDSN[2], to establish SDG-focused philanthropy as a global norm and to mobilize the world's richest individuals to allocate 1% of their net wealth per year to SDG-focused funds. 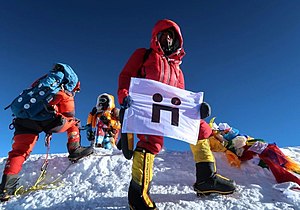 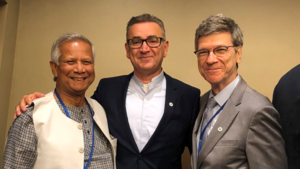 Human Act Foundation was founded in Copenhagen, Denmark in March 2016[1], by Djaffar Shalchi and his wife Ané Maro, and strives to erradicate extreme poverty.

Mr. Djaffar Shalchi is an accomplished entrepreneur in the property development business and at the forefront of philanthropic activities focusing on ending extreme poverty.[3] The Danish welfare capitalism, designed to foster social mobility and equality of opportunity, and the system made it possible for Djaffar to climb the ladder of success, even as an immigrant. The advanced social tax system financed Djaffar’s free higher education as an engineer as well as providing social security, enabling Djaffar to start his own business.[4]

Djaffar and his wife Ané Maro, wish that all the world's children could have the same opportunties. They both wanted to give these children a better life, and they were determined to never forget to give back to those who are less fortunate. Therefore, Djaffar and his wife decided to donate more than 30 million USD to charity, and start the Human Act Foundation and Project Move Humanity, focusing on extreme Poverty.[5]

Nepal suffered a devastating earthquake, killing nearly 9,000 people and injuring nearly 22,000 in 2015. Hundreds of thousands of people were made homeless, with entire villages flattened. Dolakha’s public and private schools experienced the third highest levels of damage among the 14 priority districts.

Human Act has located ten schools in Dolakha district, that they have promised to support within 5 years.

In 2017 the first project funded a three-classroom building at Guranse Primary School. The school educates 65 children from nursery to class five. The school experienced severely damage during the earthquake, and the children did not have proper education facilities. The construction work was initiated in the beginning of 2017 and completed by october 2017. In April 2018 Human Act initiated the construction of the second school ind Dolakha district, Karuna Primary School with the same framework as the first school. The construction was finalized in Oktober 2018.

To secure local ownership, the local community contributes with 15% of the construction work.[6]

In Mashad, Iran Human Act decided to support an orphanage that was housing 30 girls. Human Act purchased a large house and renovated the building, financed new beds, inventories and clothes for the children.

Today the girls have homelike surroundings, and competent and loving people to take care of them. The long-term purpose of the orphanage is to provide nurturing surroundings, so that the oprhans later in life will be able to move out and establish their own home and family.[7]

May 21 2017, CEO of Human Act in Iran, Javad Nowroozi, managed to climb the world’s highest mountain, Mount Everest where he waved Human Act / Move Humanity´s logo at the very top. Together with his team, he campaigned for Move Humanity at the peak of Mount Everest at 8848 meters' height.[8][9]

Climbing Mount Everest was a symbolic act in the race for the initiative #MoveHumanity.[10]

The Move Humanity initiative was conceptualized by Human Act in Copenhagen, Denmark, and is led by Director Prof. Jeffrey Sachs and Founder Mr. Djaffar Shalchi[11]

After being launched in Copenhagen, the initiative first became publicly known June 11, 2017 - when Human Act officially engaged in a partnership with the UN-SDSN and The Global Fund to Fight AIDS, Tuberculosis and Malaria. At this meeting Prof. Sachs, Mr. Shalchi and the Global Fund’s Executive Director, Mr. Peter Sands, signed a Memorandum of Understanding (MoU) to combine efforts, solving the SDG-related problems.[2]

Prior to the official launch of the initiative and the movehumanity.org website on June 11, Human Act Founder Djaffar Shalchi explained the Move Humanity initiative in numerous relevant forums.

As a Religions for Peace Trustee, Djaffar Shalchi spoke on behalf of Human Act at the Casina Pio IV Youth Symposion in October 2017, held at the Vatican City. In this speech, he compares the SDG's with a business, claiming that the solution to our problems is simple. Djaffar Shalchi states that we already know our goals, there is 17 of them. Since the price needed to fulfill them is also known, now all we need is funding. This can allegedly be obtained through something as simple as a wealth tax. [12]

At the SDSN Northern Europe Solutions Initiative Forum Integration, also known as SIF May 14, 2018, in Stockholm, Djaffar Shalchi was invited to end the SIF Integration by speaking about Innovations for a More Inclusive Society. [13][14]

Share
Retrieved from "https://en.everybodywiki.com/index.php?title=Human_Act_Foundation&oldid=905975"
Categories:
Hidden categories:
This page was last edited on 31 July 2020, at 05:27.
Content is available under License CC BY-SA 3.0 unless otherwise noted.
This page has been accessed 1,456 times.
Privacy policy
About EverybodyWiki Bios & Wiki
Disclaimers