Independence anarchism or anarcho-independentism is an anarchist tendency originating in Europe that attempts to synthesise certain aspects of national liberation movements with an opposition to hierarchical institutions grounded in libertarian socialism. Where a certain nation or people exists with its own distinct language, culture and self-identity, independence anarchists concur with supporters of nationalism that such a nation is entitled to self-determination. While statist nationalists advocate the resolution of national questions by the formation of new states, independence anarchists advocate self-government without the need for a state and are committed to the key anarchist societal principles of federalisation, mutual aid and anarchist economics. Some supporters of the movement defend its position as a tactical one, arguing that secessionism and self-organisation is a particularly effective strategy with which to challenge state power.[1]

Independence anarchism frames national questions primarily in terms of equality and the right of all peoples to cultural autonomy and linguistic rights, among others. Being grounded in such concepts, independence anarchism is strongly opposed to isolationism, national supremacism, racism and xenophobia of any kind, favouring instead internationalism and cooperation between peoples. Independence anarchists also stand opposed to homogenisation within cultures, holding diversity as a core principle. Those who identify as part of the tendency may also ground their position in a commitment to anti-racism (postcolonial anarchism), class struggle (anarcho-communism and anarcho-syndicalism), ecology (green anarchism), feminism (anarcha-feminism) and LGBT liberation (queer anarchism).[2]

In this way, independence anarchism is distinct from and should not be confused with national-anarchism. Although sharing a hostility to state institutions, the latter is rooted in cultural conservatism and opposition to the liberatory social currents with which most of the anarchist movement, including independence anarchists, identify, being seen as a rebranding of fascism and white nationalism.[3][4] 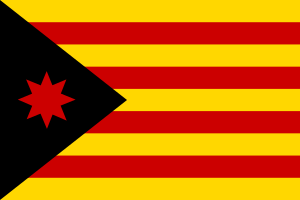 Retrieved from "https://en.everybodywiki.com/index.php?title=Independence_anarchism&oldid=1036512"
Categories:
This page was last edited on 10 October 2020, at 04:54.
This page has been accessed 167 times.
Content is available under License CC BY-SA 3.0 unless otherwise noted.
Privacy policy
About EverybodyWiki Bios & Wiki
Disclaimers
Mobile view