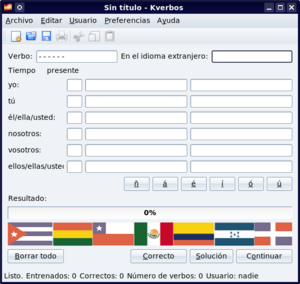 KVerbos is a software program for computers. It is an educational program that helps people practice Spanish verbs. The program comes with a set of more than 9000 Spanish verbs and its conjugation. You can select the verbs and tenses you want to train. It is possible to train especially the irregular verbs or simply look up a forgotten verb form.

Currently KVerbos, a part of the KDE Edutainment Project, will run on Linux computers. It is released under GNU GPL version 2.

This article "KVerbos" is from Wikipedia. The list of its authors can be seen in its historical and/or the page Edithistory:KVerbos. Articles copied from Draft Namespace on Wikipedia could be seen on the Draft Namespace of Wikipedia and not main one.

Retrieved from "https://en.everybodywiki.com/index.php?title=KVerbos&oldid=915701"
Categories:
Hidden categories:
This page was last edited on 2 August 2020, at 22:11.
This page has been accessed 158 times.
Content is available under License CC BY-SA 3.0 unless otherwise noted.
Privacy policy
About EverybodyWiki Bios & Wiki
Disclaimers
Mobile view