Konqi is the mascot of KDE. He is a cheerful green dragon.

Konqi's full name is "Konqi the Konqueror", the name comes from Konqueror browser, created by KDE. Konqi's design was renewed in 2013 with KDE Plasma 5 release. The current version is designed by Tyson Tan[1].

Before the advent of Konqi, was the wizard Kandalf. He was used in KDE directory applications. Kandalf was similar to Merlin from Microsoft Agent, the wizard from movie by Disney "The Sword in the Stone" and character name from Tolkien's book "Gandalf", to prevent suing from companies to KDE, since KDE 3, Kandalf has been completely removed[2].

Konqi first appeared in April 1999, he was an assistant from the KDE help in KDE 2 beta. The first version of Konqi was painted by Stefan Spatz. Beginning from KDE 3, Konqi completely replaced Kandalf[2].

When KDE Plasma 5 was being developed, in December 2012, the community decided to change the design of Konqi, so that the mascot was as modern as the environment. KDE also asked to use Krita for making a new design. On the KDE Community Forums were created threads[3] to vote for a new Konqi's design. 19 designs was went to vote, Konqi, drawn by Tyson Tan, was chosen as the new design of mascot[4]. 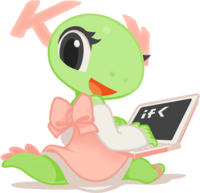 Katie is a female dragon. It was presented in 2010. Appointed as a mascot for the KDE women's community[5]. As a Konqi, she also has two designs. The old version was drawn by Agnieszka Czajkowska, the current version by Tyson Tan. In the old version, Katie was Konqi's girlfriend[6]. She is a green dragon in a white dress. With two fangs, two white antlers on his head, 3 fingers on hands and toes with claws. Wears a strap and a silver bracelet. She had no long back wings with compared to Konqi.

In the current version, Katie is a girl who is a neighbor of Konqi. They are also close friends. She has a brighter green color of skin than Konqi. With large cartoon eyes with long eyelashes. No visible fangs. She also has two pink antlers, seems similar to "K", but there are a lot of differences. Konqi antlers connect to his head with a left root of "K", Katie's antlers connect to her head with a right root of "K". The edges of the antlers of Katie are round. She has no claws on fingers. Three pink spikes on the tail. She is wearing a pink dress with long white sleeves. 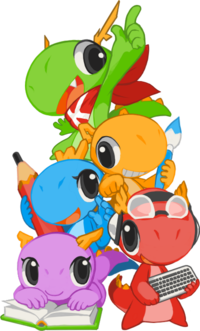 Konqi and his colorful friends

Other dragons with different colors and professions were added to Konqi as part of the Tyson Tan redesign concept. Each dragon has a pair of letter-shaped antlers that reflect their role in the KDE community.

This article "Konqi" is from Wikipedia. The list of its authors can be seen in its historical and/or the page Edithistory:Konqi. Articles copied from Draft Namespace on Wikipedia could be seen on the Draft Namespace of Wikipedia and not main one.

Retrieved from "https://en.everybodywiki.com/index.php?title=Konqi&oldid=494690"
Categories:
Hidden category:
This page was last edited on 13 July 2019, at 03:44.
This page has been accessed 795 times.
Content is available under License CC BY-SA 3.0 unless otherwise noted.
Privacy policy
About EverybodyWiki Bios & Wiki
Disclaimers