Download books of Kwong Weng Yap or buy them on amazon

This is a Chinese name; the family name is Yap.

Yap Kwong Weng (born November 11, 1977) is a Singaporean business executive and writer.[1][2] He is Principal Advisor of KPMG Singapore[3] and co-founder of Triip, a Vietnam-based travel tech company.[4][5]

Between 2014 and 2016 he was the COO of Parami Energy Group in Myanmar.[6][7] He has also worked for Jebsen & Jessen (SEA), as a General Manager who oversaw its expansion into Laos. Yap has been named a Young Global Leader of the World Economic Forum (2012 to 2017).[8] In 2018, as its Executive Director, he set up and heads the first Artificial Intelligence joint lab in partnership with A*STAR in professional services to deploy new industry technologies.[9][10][11]

In May 2016, Yap became known after being featured in an article with the Singapore Straits Times.[12] During June of the same year, Marshall Cavendish published a book on Yap's work in Southeast Asia.[13]

On 30 May 2018, Shin Min Daily News reported on Yap’s life journey from a non-graduate to becoming a senior executive in KPMG.[14] On 21 May 2019, Yap was featured by The Straits Times as a potential political candidate in the Next Singaporean general election. He replied that he does grassroots work "without any specific consideration of candidature".[15]

Born in 1977, Yap grew up in Singapore, and lived in a small 3-room flat in Toa Payoh with his family for over 25 years. He received his secondary education in the now defunct First Toa Payoh Secondary School where he was a member of the National Cadet Corps, and his pre-university education at Jurong Institute, now known as Millennia Institute. At 18, he applied several times to the National University of Singapore (NUS) but was rejected. Instead, Yap joined the Singapore Armed Forces Commando Formation while saving up for a college education. The opportunity to pursue tertiary education, however, came many years later.[12]

Yap received a BA in Communication studies at age 30 from the State University of New York at Buffalo[16] with savings earned from the Army.[12] Thereafter, he earned a Master of Public Administration from the Lee Kuan Yew School of Public Policy where he received a leadership award in 2012[17] and was described as a game changer by NUS magazine.[18] He earned a PhD in management strategy from the University of Glasgow[19] and read peace and conflict studies as a Peace Fellow in Thailand's Chulalongkorn University under a Rotary Foundation Scholarship.[20][21]

Before entering the private sector, Yap served as a Commando Captain in the Singapore Armed Forces where he was trained as a paratrooper and a ranger. After being commissioned as a second lieutenant in 1998 from Officer Cadet School (Singapore) where he received a Sword of Merit, Yap was posted to 1st Commando Battalion and the Special Forces as a Platoon Commander. In 2001, he went on to attend Class 237 of the United States Navy SEAL selection and training, graduating in February 2002 from the Naval Special Warfare Center in Coronado, California.[12]

In 2009, Yap developed a monograph on Singapore's Special Forces published by Pointer (journal).[22] In 2010, Yap transferred to the Joint Intelligence Directorate of the Ministry of Defence (Singapore).

After leaving the military, Yap worked as a General Manager of Jebsen & Jessen (SEA). Next in 2014 came a stint as COO of Parami Energy, a Myanmar conglomerate involved in the oil and gas business. At the same time, he helped form Triip, a travel tech company in Vietnam.

After Myanmar, Yap worked as Regional Advisor of the Lee Kuan Yew School of Public Policy in April 2017 where he worked with business and government leaders in support of the school's wider strategy. 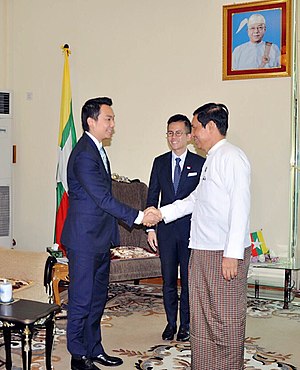 Yap meeting with Khin Maung Cho, Minister of Industry, Myanmar on 25 May 2017 in Naypyidaw

He joined KPMG in November 2017 as a Principal Advisor and Executive Director focusing on the firm's strategy and set up an AI lab.

Yap was the Secretary-General of the United Nations Association of Singapore (2011 to 2013) where he organized sustainability projects in Singapore and Sarawak with youth groups, civic and academic institutions.[23][24][25] Since 2013, he has been a country chair of non-profit Global Dignity, where he advocates dignity, a fundamental human right, for students in Cambodia.[26] He ran 100 km across China's Taklamakan Desert in an ultramarathon to raise awareness for the UN's Millennium Development Goals and gave a TEDx talk on the wider benefits of volunteering.[27][28]

Yap wrote his first book in 2009, where he developed Key Perspectives of Special Forces, a collection of articles by current and former Special Forces set in a monograph. His second book is Leap: Journey of a Young Global Leader from Singapore. In July 2017, Yap wrote a strong rebuttal via the Straits Times and defended Kishore Mahbubani after Singapore diplomats criticized him for writing an article that discusses Singapore's position as a small state.[29][30]

Retrieved from "https://en.everybodywiki.com/index.php?title=Kwong_Weng_Yap&oldid=919681"
Categories:
Hidden categories:
This page was last edited on 4 August 2020, at 13:40.
This page has been accessed 590 times.
Content is available under License CC BY-SA 3.0 unless otherwise noted.
Privacy policy
About EverybodyWiki Bios & Wiki
Disclaimers