This is a list of the rolling stock featured in the UK children's television series Thomas & Friends. 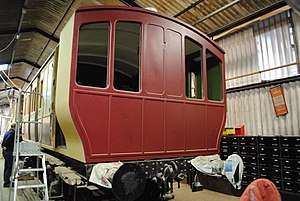 Every day, after Gordon arrived at Knapford at 3:30 PM with the express, engines have to shunt a coach from the train into the bay platform for passengers wanting to travel to destinations on Thomas' Branch Line. Thomas, Annie and Clarabel then come from Elsbridge to collect it.

In the Railway Series, the coaches were based on BR MK1 coaches. In the Television Series, they were based upon the SR Maunsell Coaches.

A 20ton LMS brake, the basis of Bradford
"Troublesome Trucks" redirects here. For the story, see James the Red Engine.

Every morning the van is coupled to Thomas' first train, the farmers send the milk to the stations and Thomas delivers the milk to the dairy. When Daisy was preparing for her first train, she refused to pull the van once it was coupled to her claiming it was "bad for her swerves", and she blew a fuse on purpose. Percy and Toby had to take the van in Thomas' absence and Daisy's refusal. However, now that Daisy has learnt sense, she sometimes takes the milk instead of Thomas and also The milk van has occasionally been added on Percy's Mail Train.

They are also simply known as vans or trucks in the UK narration or cars in the US narration.

The Breakdown Train's model is currently on display at Drayton Manor, although the flatbed underneath the crane's hook is absent.

In the UK dub of the game Trouble on the Tracks, the Breakdown Train is referred to as the "Breakdown Truck" for unknown reasons.

Since the fourteenth series, many recoloured versions of the Works Unit Coach have been seen, mostly being used in goods trains.

(The Spiteful Brake Van's Ertl description card incorrectly refers to him as an engine and incorrectly says that "He does, however, work very hard with Donald & Douglas to keep the trucks in order", even though in the second series episode Break Van, he was causing trouble for the twins and was actually crushed to pieces by Douglas.)

(In some merchandise bios and on the Official Website, The Chinese Dragon is mistakenly referred to as being alive with male pronouns.)

Share
Retrieved from "https://en.everybodywiki.com/index.php?title=List_of_Thomas_%26_Friends_rolling_stock&oldid=970366"
Categories:
Hidden category:
This page was last edited on 19 August 2020, at 10:57.
This page has been accessed 857 times.
Content is available under License CC BY-SA 3.0 unless otherwise noted.
Privacy policy
About EverybodyWiki Bios & Wiki
Disclaimers
Dark mode