Oliver the Great Western Engine is an anthropomorphic steam engine in The Railway Series books by the Rev. W. Awdry (and his son Christopher Awdry) and in the television adaptation Thomas & Friends. He is a Great Western 1400 Class tank engine who works on Duck's Branch Line ("The Little Western"), and lives on the Island of Sodor.[1]

In addition, he has two ex-GWR Autocoaches (by the names of Isabel and Dulcie) and a GWR Brake Van by the name of Toad.

Oliver in the television series[edit]

Oliver first appeared in "Escape", which is the 21st episode of Series 3 of the series where Douglas saves him from scrap when he runs out of coal. He also appeared from series 4, 5 and 7, made cameo appearances in series 6, but was absent from series 8 through 11. He (along with Toad) reappeared briefly in series 12, before the latter was completely absent from series 13 to 17. Toad has been absent since Series 21 and remained absent. Oliver was absent from Big World! Big Adventures! until Series 23. Making cameos since Series 24.

Oliver finally reappeared in the series 18 episode "Toad's Adventure", during that same season and in the nineteenth and twentieth series', he played a few lead/co-lead support roles, along with Toad too.

He appeared in the specials Tale of the Brave, Sodor's Legend of the Lost Treasure, The Great Race, Journey Beyond Sodor and Big World! Big Adventures! along with a non-speaking role in Thomas and the UK Trip.

Oliver is voiced by Joe Mills (UK/US), who also voices Douglas and Toad. 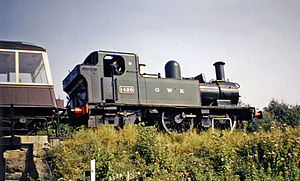 A preserved 1400 on the Dart Valley Railway.

Retrieved from "https://en.everybodywiki.com/index.php?title=Oliver_the_Great_Western_Engine&oldid=991391"
Categories:
Hidden categories:
This page was last edited on 30 August 2020, at 03:29.
This page has been accessed 53 times.
Content is available under License CC BY-SA 3.0 unless otherwise noted.
Privacy policy
About EverybodyWiki Bios & Wiki
Disclaimers
Mobile view