Peter Sam (originally called Stuart) is a fictional narrow gauge steam locomotive character in The Railway Series children's books by the Rev. W. Awdry and the spin-off TV series Thomas and Friends. Peter Sam lives and works on the Skarloey Railway on the Island of Sodor as engine No. 4.[1][2]

Peter Sam first appeared in The Railway Series in the story Sir Handel. This story is set just after Peter Sam and Sir Handel had been purchased by the Thin Controller. Peter Sam was originally called Stuart and lived on the Mid Sodor Railway with Duke and Falcon When the railway closed in 1947, he and Falcon were sold to the Sodor Aluminium Company at Peel Godred for an expansion project. Following the project's completion in 1951, they were oiled, greased and sheeted under tarpaulins ready for disposal and stood for a year in the Company's yard. In 1952, they were purchased for the knockdown price of £50 (£25 each) by Sir Handel Lloyd Brown for service on the Skarloey Railway, overhauled and repainted in SR red livery at Crovan's Gate Works and renamed Peter Sam and Sir Handel respectively.

Peter Sam holds a lot of respect for Skarloey, and often tries his best to prevent Sir Handel from getting into trouble. He is a friendly engine who aims to please, and is highly popular among the coaches. The trucks also respect him because he only bumps the trucks that misbehave.

After an accident on the incline when collecting slate trucks, Peter Sam had difficulty steaming. His funnel was knocked off in a tunnel by an icicle. He was soon fitted with an experimental funnel (a Giesl ejector) which enables him to take heavier loads. At first, the others teased him for it, but they soon learned how it made work much easier for him, and now they even wish they had one like it. Peter Sam's friendliness is what keeps the other engines working happily with him.

Peter Sam in the TV series[edit]

Peter Sam was introduced as Stuart in the fourth season of Thomas the Tank Engine and Friends. A number of Peter Sam's original adventures were adapted, with the same personality he had in the books.

For the next few seasons, his character waxed and waned. After being absent with the other Narrow Gauge engines for Season 8, he returned with the others that are for the new model series, set before the arrival of Mighty-Mac and the return of Fearless Freddie, (except Sir Handel) the following year, starring in the episode The Magic Lamp. He still retains qualities from the books, and has had his flattened funnel since the Special Funnel adaptation in 1995. In recent episodes, Peter Sam has made cameos and other minor roles, but in Season 11 he made a couple of speaking roles. In Season 12, Peter Sam stars in Mountain Marvel where he finds a statue of Proteus.

Unlike the Skarloey Railway of the books, where all the locomotives are painted red, in the TV series each is painted a different colour: Peter Sam retains his original green colour from The Mid-Sodor Railway. Also, Peter Sam's Giesl Ejector was more square flat than in the RWS. For his CGI appearance, though, he has an accurate Giesl.

From Spring 2012 onwards, Peter Sam is now currently voiced by Steven Kynman (UK/US) in the CGI version of the series in both sides of the atlantic, respectively.

Peter Sam appeared in the specials The Great Discovery, Blue Mountain Mystery, King of the Railway, The Great Race, and Journey Beyond Sodor. 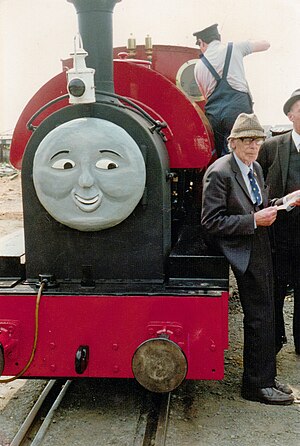 Edward Thomas in 1988, dressed up as Peter Sam

This article "Peter Sam" is from Wikipedia. The list of its authors can be seen in its historical and/or the page Edithistory:Peter Sam. Articles copied from Draft Namespace on Wikipedia could be seen on the Draft Namespace of Wikipedia and not main one.

Share
Retrieved from "https://en.everybodywiki.com/index.php?title=Peter_Sam&oldid=987809"
Categories:
Hidden categories:
This page was last edited on 26 August 2020, at 04:46.
This page has been accessed 337 times.
Content is available under License CC BY-SA 3.0 unless otherwise noted.
Privacy policy
About EverybodyWiki Bios & Wiki
Disclaimers
Dark mode