Skarloey (/skɑːrloʊ.iː/, scar-LOW-EE) is a fictional narrow gauge tank locomotive from the Railway Series by the Reverend W. Awdry. He is one of the oldest engines on the Island of Sodor. Skarloey lives and works on the Skarloey Railway as Engine No.1.[1][2]

Skarloey came to the Island of Sodor in 1865. When he arrived, there was some difficulty in getting him off of the boat that he had been brought upon. He was helped by an old tank engine by the name of Neil. At first he was badly behaved and refused to pull trucks. He also had a habit of "bucking", which was cured by adding an extra pair of wheels. At the same time, he received a cab, which made him more conceited. But after his brother Rheneas rescued him following an accident, he learnt the error of his ways.

Since then, he has become a hard worker and shares his duties with Rheneas. He was a proper engine who is dedicated to his narrow line and is always eager to help out when he's needed. However, at one point he worked so hard that he became quite ill, leaving Rheneas with the responsibility of running the line on his own until Sir Handel and Peter Sam arrived in 1952. When he was repaired, Skarloey went straight back to work. He mainly pulls coaches, and he is the engine usually put in charge of special trains. He is affectionately nicknamed "the Little Old Engine". He was also once the subject of a television programme, along with Rheneas and the other engines of the Skarloey Railway.

Skarloey in the TV Series[edit]

Skarloey was introduced in series 4 of Thomas the Tank Engine and Friends. That series placed a great focus on him and the other narrow gauge characters, with a number of tales from the original books televised.

As the series progressed, Skarloey's character waxed and waned, especially under the influence of HIT Entertainment. The narrow gauge engines took a full absence in 2004, but returned the following year alongside Rheneas, Sir Handel (returned 2006), Peter Sam, Rusty, Duncan and new arrivals, Mighty Mac (introduced 2005) and Fearless Freddie (introduced 2006). However, his character was altered to a more teenage personality. In recent episodes, he has tried to impress the other engines by bravely but foolishly going up the incline with the coal trucks, along with Rheneas he challenged Fearless Freddie to a race, he was also been a coward over storms and The Wharf and he was also carried across the Island on Thomas' flatbed in the series 10 Finale. In the CGI Series, his classic personality has returned. Skarloey is now the respected leader of the Skarloey Railway.

Skarloey's small gauge model was originally used in series' 4 and 5 (in the episode Duncan Gets Spooked, the model was used as Rusty's Ghost Engine that fell off an Old Iron Bridge into a ravine). It was later used in the Series 10 episode Thomas and Skarloey's Big Day Out and was the third to return in the New Era of Thomas and Friends (The first was Rusty in Calling All Engines and the second was Peter Sam's in the series 9 episode The Magic Lamp). His small scale model, along side his name-board and one of his facemasks were purchased in August 2020 by Twitter user ThomasTankMerch.[3]

In the Japanese Version of Series 4–7, Skarloey was voiced by Tomohisa Aso. His new voice actor in Series 9 is Hideyuki Umezu.

From Spring 2012 onwards, Skarloey is now currently voiced by Keith Wickham (UK/US) in the CGI Version of the Series on both sides of the Atlantic, respectively.

Skarloey appeared in the Specials The Great Discovery, Blue Mountain Mystery, King of the Railway, and The Great Race.

Skarloey has been released in a number of model ranges, including: 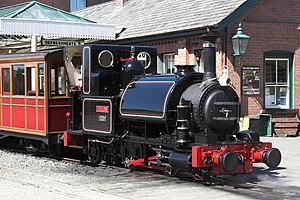 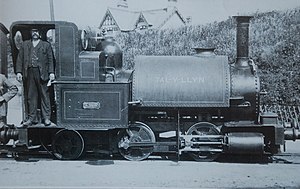 Skarloey is based on the Locomotive Talyllyn, who is Skarloey's twin, who works at the Talyllyn Railway in Tywyn, Wales. Like the Fictional Character, Talyllyn was built in 1864, and has worked on his original railway since 1865.

This article "Skarloey" is from Wikipedia. The list of its authors can be seen in its historical and/or the page Edithistory:Skarloey. Articles copied from Draft Namespace on Wikipedia could be seen on the Draft Namespace of Wikipedia and not main one.

Retrieved from "https://en.everybodywiki.com/index.php?title=Skarloey&oldid=994661"
Categories:
Hidden categories:
This page was last edited on 2 September 2020, at 10:07.
This page has been accessed 81 times.
Content is available under License CC BY-SA 3.0 unless otherwise noted.
Privacy policy
About EverybodyWiki Bios & Wiki
Disclaimers
Mobile view