Mauricio Umansky (born c. 1969) is an American high-end real estate agent, media personality, and philanthropist. His wife is Real Housewives of Beverly Hills star Kyle Richards and he appears on the show. He is known for being one of the top real estate agents in the country.[5] 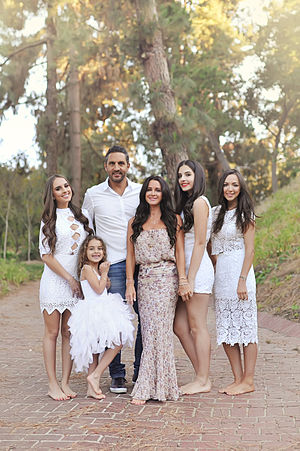 Mauricio Umansky was born in Mexico to Eduardo Umansky and Estella Sneider on June 25, 1970. As a child, he struggled with neutropenia and was in and out of hospital for a number of years.[7] He has one sister named Sharon Umansky Benton who was born December 9, 1971. When Mauricio was six, the family moved from Mexico to the United States.[4]

Umansky dropped out of the University of Southern California to start his business career.[8]

Umansky began his career by starting a best selling clothing line called 90265. The company did "quite well" and he was able to sell it at age 26 for a profit. After selling the company, he began working at Hilton & Hyland, a real estate firm which was co-founded by his brother-in-law Rick Hilton. The real estate firm is based in Beverly Hills, California, and specializes in homes and estates in Beverly Hills, Holmby Hills, Bel-Air, Brentwood, Pacific Palisades, Malibu, Hollywood Hills, as well as estates from Santa Barbara to San Diego.[9] Umanksy's first sale at the firm was a $7.5 million home that belonged to Guraish Aldjufrie, his wife Kyle's ex-husband.[4]

In 2011, Umansky founded his own real estate firm The Agency. It specializes in luxury properties in the Beverly Hills and surrounding area. Both David Parnes and James Harris of Million Dollar Listing Los Angeles work at The Agency. Parnes stated, "Mauricio is a great guy, like genuine. He's a friend. He's a mentor. We go on listings with him. We sell loads of big, big high-end real estate with him. He's just a great guy... he's just a good, easygoing, smart, laid back but seriously ambitious at the same time, successful great guy."[10] One of Umansky's clients included basketball star Michael Jordan, who listed his 56,000-square-foot mansion for sale in Highland Park, Illinois in 2015.[11][12] Other clients have included Sofia Vergara, Kim Kardashian, and Kanye West.[13][14]

With his wife, Umansky is listed on the "First Families" of the Children's Hospital Los Angeles, which means they have donated US$100,000 or more to the hospital.[15]

Prior to marrying actress Kyle Richards, she converted to Judaism for him.[3] Their wedding took place on January 20, 1996. They reside in Bel Air, Los Angeles, California.[1] Together they have three daughters, Alexia (born June 18, 1996), Sophia (born 2000), and Portia (born 2008).[16] Kyle had a daughter from her previous marriage, Farrah Aldjufrie, who works with Umansky at his real estate firm.[17]